Give the Government a Chance, Says Bassil 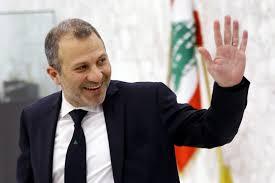 Free Patriotic Movement chief MP Jebran Bassil, who is also a former foreign minister who has been a frequent target of protesters in crisis-hit Lebanon, said Thursday he understands the people want change, but said he's not going anywhere until voters drive him out.

Bassil was officially replaced as foreign minister this week with the appointment of a new technocratic government backed by his party and the allied Hizbullah group. He said the new team should get right to work pushing for reform -- and demanded results in a reasonable amount of time.

"We should give the government a chance, and a small delay of time," Bassil told The Associated Press, suggesting "three months or 100 days."

Bassil emerged as a power broker in Lebanese politics over the last decade. The new government of 20 ministers has at least six ministers his party backs. Bassil is the son-in-law of President Michel Aoun and many say he himself harbors presidential aspirations. He appears frequently in the media and many blamed him for fanning anti-refugee sentiment, often faulting them for the country's woes.

As the head of one of the country's main Christian parties since 2015, Bassil currently leads the largest bloc in Parliament, controlling with allies 29 out of the 128 seats.

Bassil's appearance at the World Economic Forum on Thursday stoked fury among his critics in Lebanon, who accuse him of corruption and blast him as the embodiment of a sclityuerotic democratic system. The country's woes have been compounded by unpaid salaries and public services, jockeying for influence by foreign powers and sectarian divisions. Also, nearly one in four people now living in Lebanon is a refugee from neighboring Syria.

"This government has to quickly adopt new policies in economy and finance and implement the new plans that are already in place and this is what will make it succeed or fail," Bassil said. He noted, in particular, changes needed in waste management and electricity in a country beset by sporadic power outages and trash piling up in public areas.

Bassil once served as electricity minister from 2009 until 2014, when he returned as foreign minister.

Bassil said he thought Lebanon could enact change even without Western government support. However, he said, "If we prove internally that we can have the ability to reform, then we can ask the international community to help."

Bassil took aim at those who consider him corrupt, defending himself as "the first one in Lebanon to reveal my accounts," and listing steps including pushing for laws that would limit bank secrecy and immunity of public servants.

"So put your pressure on the deputies that are refusing to adopt these laws," he said, when asked to respond to his critics.

When word came out that Bassil was invited to Davos, many Lebanese campaigned against his trip, petitioning the World Economic Forum to un-invite him, arguing that he no longer represents Lebanon. Many also argued it was a costly trip for a bankrupt country. Asked at the forum if he paid for the trip from state money, Bassil said he paid for it privately, adding that he arrived on a private jet that "was offered to me." He didn't elaborate.

Bassil said the street protesters who shouted and chanted against him do not represent the majority of Lebanese. "When, in elections they do (voice their opposition), definitely we will obey their desire," he said.

In the meantime, Bassil said he's not going anywhere.

"It is my obligation, as a deputy to this parliament, to be representing the people," he said.

Basil has also proved that he is a fool if not asked questions by OTV or Manar.

Also, he didn't answer on how he paid for his fare to Switzerland---who is his supposed sponsor/friend that was able to pay for a private jet?

And dude, how's tht 24 hour I mean 8 hour electricity doeing under FPM---if you can't prove he is corrupt, you can prove he is inept.

"Bassil once served as electricity minister from 2009 until 2014" but still no electricity...

""If we prove internally that we can have the ability to reform," but aren't you in the party of change and reform? why couldn't your gvt reform as you were in charge? So, why would they now!

Bassil keeps mentioning the last elections but he forgets that he and many of his MPs were elected thanks only to alliances that no longer exit.

I do agree with you about the voting part. So here is a question for you, I voted for a candidate / party that promised me basic things that should be obtained in any country such as 7*24 electricity, clean water and employment and nothing else and they failed to deliver on all of the above and they kept getting richer and I kept getting poorer.. So as any civilized person will revolt against the person I voted for. Basically what all people do is they blame the Zionist and the Americans for the situation and not themselves. So your argument makes no sense on any level.

A crook by any other name. Oh yeah his father in law insisted he attends looool what a predicament lol

Ever heard of the word 'incapable' or 'incompetent' to deliver.

So if you have cancer, do you wait until the next election to treat it or immediately eliminate it?

A thief cannot be given a chance.

In his head, he’s already on the run. Every night he prays that no one will be able to trail the billions he funneled out of Lebanon.