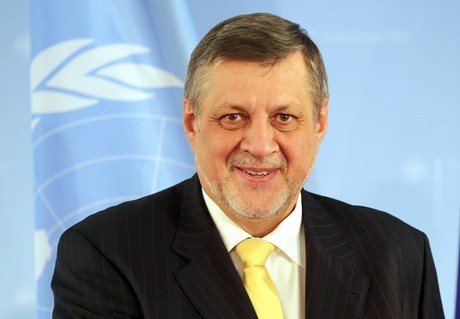 UN Special Coordinator for Lebanon Jan Kubis said he touched "positive signals" during his meeting with PM Hassan Diab at the Grand Serail on Friday, stressing that the international community expects Lebanon to implement a much-needed reform and fight corruption.

“I touched seriousness and positive signals from the PM’s part,” said Kubis, “it is crucial to see that the pledges for reform are kept and transparency adopted to the maximum otherwise, we will be in deep crisis” he said in remarks to reporters after the meeting.

“The international community expects the government to embark on the implementation of reforms, fight corruption and lend an ear to the demands of the people in the street,” added Kubis.

In earlier tweets, Kubis had sharply criticized Lebanese politicians saying they had only themselves to blame for the chaos in Lebanon as the country grapples with nationwide protests, unprecedented economic crisis and violent demonstrations leaving many hospitalized.

if they wanted to do reforms they would have already. They just aren't and they want the money. Good on all donors especially the Gulf Arab states not help with a single penny as long as the country is rules by a fanatical militia with cronies thumping at the bit for every dollar that comes in to line up their pockets as usual.

I have been saying as hard a sit will be for majority of the people daly lives, but the system has to completely collapse for any tangible solution to work and star a fresh.