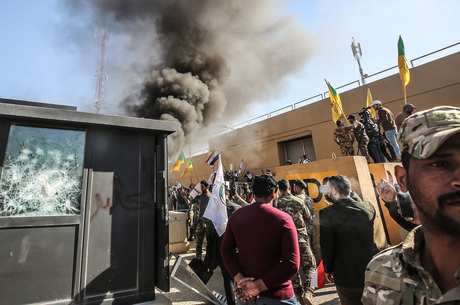 Iraq's anti-government protests were dealt a blow after a powerful Shiite cleric withdrew his support from the movement, leading security forces to set fire to protesters' tents overnight Saturday in the country's south, as well as re-open key public squares in Baghdad that had been occupied by the demonstrators.

The presence of Muqtada al-Sadr's followers and his militia group had shielded the protesters from security forces and unknown groups looking to harm and suppress them, activists said. With that cover gone, many in the four-month-old movement feared the worst.

The demonstrations since October have been critical of government corruption, high unemployment and Iranian influence in Iraqi politics. Crackdowns by security forces have killed at least 500 protesters. But many of the protesters are worried that the conflict between the U.S. and Iran, which is playing out in part on Iraqi soil, is killing their momentum.

In a tweet Friday evening, al-Sadr indicated his "disappointment" toward anti-government protesters in Baghdad's Tahrir Square, the epicenter of the anti-government protests. Al-Sadr's tweet came just hours after tens of thousands of his followers staged a separate anti-U.S. rally in a nearby Baghdad neighborhood, which most demonstrators in the square steered clear of.

At around around 2 a.m. local time Saturday, riot police set fire to a protest encampment in a central square in the oil-rich southern city of Basra, two activists said. The crackdown came after al-Sadr's followers packed up their tents and left.

In Baghdad, key squares and roads that had previously been a focal point of protest violence were re-opened for vehicle access, according to a statement from the Baghdad Operations Command.

Protesters said they were fearful that security forces would next come to root them out of Tahrir Square. At least eight tents occupied by al-Sadr's supporters were removed, said one activist.

"(Al-Sadr's statement) gave the green light for the government to suppress the demonstrations," said Husanien Ali, a 35-year-old protester. "We consider this a betrayal of the blood of the martyrs and the sacrifices made by the followers of Muqtada al-Sadr."

In Baghdad, the vital Mohammed al-Qasim highway, Tayaran Square and al-Nidhal Street were all reopened.

Ahrar Bridge, which had been partly occupied by protesters in a stand-off with security forces, was also reopened, according to Baghdad Operations Command. Concrete blocs were removed to re-open al-Khilani Square, the statement said.

Concrete blocs were removed from the street and cleaning crews were sweeping Ahrar Bridge, one activist said.

Protesters continued to occupy Jumhuriya and Sinak bridges, which lead to the heavily fortified Green Zone.