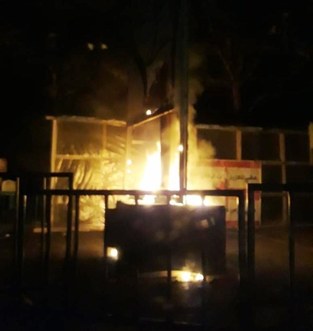 A “fist of the revolution” unveiled on Friday in the southern town of Nabatieh was set on fire on Saturday, the National News Agency said.

Anti-government protesters unveiled the statue during a ceremony to commemorate 100 days since the beginning of the October 17 popular uprising.

The ceremony was held amid tight security measures taken by the army and Internal Security Forces, as supporters of Hizbullah and the AMAL Movement staged a rival demo at the location, chanting slogans supportive of Hizbullah chief Sayyed Hassan Nasrallah and Speaker Nabih Berri.

A representative of the Hizbullah and AMAL supporters said their demo was not aimed at “stirring a problem with the protest movement or anyone else.”

“But these people are provoking us by raising this fist in Nabatieh. This city only raises the fist of Imam Hussein and Nabatieh expelled the occupiers and offered martyrs and will not accept such a symbol, a symbol of the international masonic movement. It should be removed and we will not accept that it stays in its place,” the spokesman said.

The “resistance” doesn’t approve of the revolution and burning its symbols is a physic manifestation of its opposition.

they are afraid of losing the council of the south, or at least having some oversight over it.