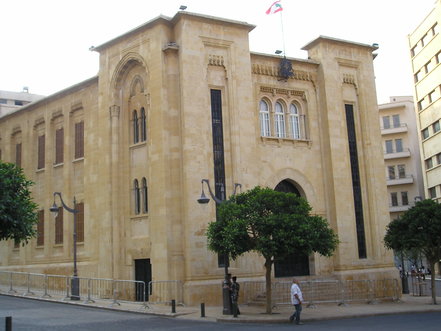 The bloc said it decided not to participate because the parliament convenes to discuss the budget before a confidence vote for the new chosen government, and because the people reject it.

MP Faisal Kamari, Paula Yaacoubian, Naamet Ifrem, Jihad Abdul Samad and many others said they will refrain from attending.

Lawmakers are scheduled to begin a two-day discussion and later approval of the state budget amid a crippling financial crisis.

Lebanese security forces scuffled with protesters near the parliament building in downtown Beirut.

Thousands of soldiers, including special forces, as well as riot policemen were deployed on major roads in the capital and its suburbs.

They had sealed off the zone leading to parliament to prevent protesters from blocking the lawmakers' path. Protesters blocked roads further afield in an effort to prevent lawmakers from reaching the building.

The protesters have been demonstrating for more than three months against the ruling elite that has run the country since the end of the 1975-90 civil war.

The protesters have rejected the new 20-member government of Prime Minister Hassan Diab, which was announced last week.