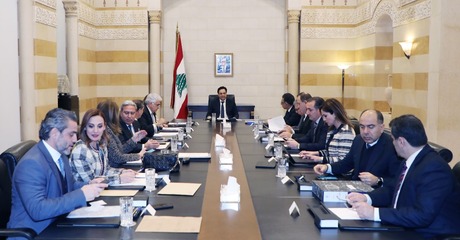 Prime Minister Hassan Diab on Monday presided over the fourth meeting of the ministerial panel tasked with drafting the Policy Statement of the new government.

“PM Dr. Hassan Diab stressed at the beginning of the session that the approval of the state budget in parliament sends a positive signal domestically and externally, regardless of the reservations related to the circumstances of this budget and its content,” Information Minister Manal Abdul Samad said after the meeting.

“PM Diab said the government was keen on facilitating the adoption of this budget in light of its vital importance for the continuity of the state’s work and out of commitment to the constitutional deadlines,” Abdul Samad added.

“The PM underlined that the approval of the budget is a juncture that allows the government to focus its work on finalizing the Policy Statement, which should be completed as soon as possible. That’s why a series of consecutive meetings will be held this week to continue drafting the statement,” the minister went on to say.

She revealed that the committee has conducted a first reading of the completed part of the draft, amending some articles and adding others related to the plans of some ministries.

“The committee will continue to receive the work plans of all ministries over the next two days,” she added.

Asked whether anything is “obstructing” the statement, Abdul Samad said: “Nothing is obstructing the Policy Statement and we are only taking our time on each point in order to meet the domestic and foreign demands.”