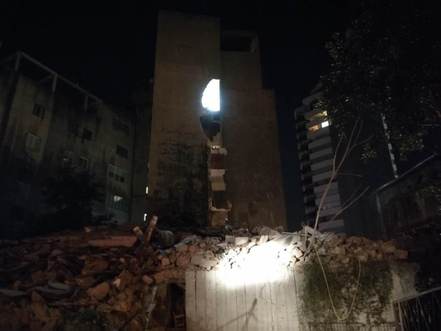 Prime Minister Hassan Diab followed up until the first hours of dawn on the issue of the collapse of the Merhej building in Ashrafieh to confirm that no casualties were recorded and inquire about the safety of the area’s residents, the National News Agency said.

The collapse of the old and uninhabited three-story building at around 1:00 am caused no casualties but damaged a number of parked cars as debris blocked the street. The ground floor houses an operating bakery.

“Crews from the Internal Security Forces and the Beirut Fire Brigade arrived on the scene to secure public safety due to the presence of gas canisters in the bakery,” NNA said.

Engineering teams from Beirut Municipality meanwhile removed the debris and reopened the road.

Diab had made a series of phone calls with Interior Minister Mohammed Diab, who in turn tasked the relevant security agencies with conducting the necessary investigations and determining the causes behind the building’s collapse.

He also called High Relief Commission chief Maj. Gen. Mohammed Kheir to inquire about the damage extent, asking him to carry out an inspection ahead of taking further measures.

Culture and Agriculture Minister Abbas Mortada later visited the site in Ashrafieh, where he noted that "negligence of traditional buildings is unacceptable" and called for referring the file to the judiciary.

There was a devastating earthquake is Turkey 4 days ago which destroyed thousands of buildings... and citizens of Tripoli, Beirut and Sidon felt it. There’s a clear correlation here between the two events.