Key Dates in Britain's Relations with the EU 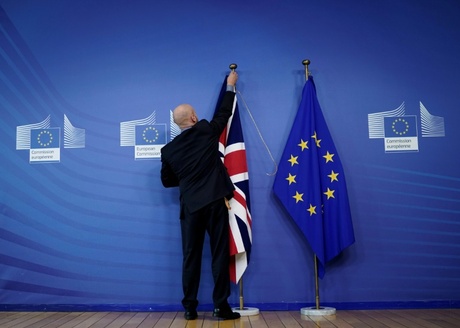 Here are the key dates of Britain's often troubled history within the European Union, which comes to an end on Friday.

- August 9, 1961: Britain formally applies to join what was then called the European Economic Community (EEC).

- January 1, 1973: Britain finally enters the EEC at the same time as Ireland and Denmark, after De Gaulle has left office.

- June 5, 1975: In a referendum called by the new Labour government on remaining in the EEC, more than 67 percent of Britons vote "Yes".

- November 30, 1979: New Conservative prime minister Margaret Thatcher demands a rebate on Britain's contribution to the European budget, reportedly demanding at a summit: "I want my money back." She gets her way in 1984.

- September 20, 1988: Thatcher gives a speech in the Belgian city of Bruges that becomes a rallying cry among eurosceptics for less European political integration.

- February 7, 1992: A new stage of political and economic integration is launched by the Maastricht Treaty under which the bloc becomes the European Union. Britain secures an opt-out from some provisions, including joining a planned single currency.

- July 23, 1993: After infighting in his governing Conservative Party over integration in Europe, prime minister John Major survives a confidence vote.

- June 23, 2016: At a referendum organised after the Conservatives come to power in 2015, Britain votes by 52 percent to 48 percent to quit the EU. Prime minister David Cameron, who had campaigned to remain, resigns.

- March 29, 2017: Cameron's successor, Theresa May, starts the two-year countdown to Britain leaving the bloc with a formal letter of notice to EU president Donald Tusk.

- November 22, 2018: Britain and the EU reach a provisional agreement on their post-Brexit relations, a week after striking a draft divorce deal. It is formalised on November 25 by EU leaders.

- January 15, 2019: Britain's lower house of parliament votes against the deal, the first of three times it will do so.

- July 24: Brexit figurehead Boris Johnson replaces May as prime minister, vowing to take Britain out of the EU on October 31 with or without a deal.

The British parliament delays its vote on the text, forcing Johnson to ask Brussels for a new postponement of the Brexit date. It is set for January 31, 2020.

There will be a transition period until at least December 31, 2020, to allow both sides to work out their new relationship, notably on trade.