Pompeo Pushes against China, Russia in Visit to 'Stans' 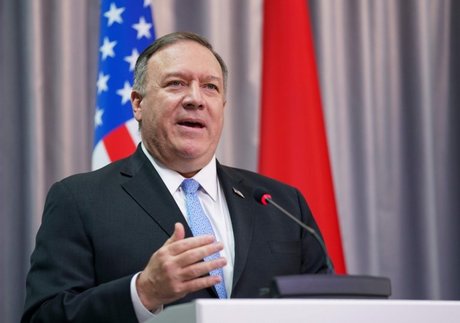 U.S. Secretary of State Mike Pompeo arrived in Uzbekistan on Sunday for the final stop of a five-country tour in which he is maneuvering to undercut Chinese and Russian influence.

Pompeo's visit to the Central Asian country of 33 million will see him hold talks Monday with President Shavkat Mirziyoyev, who has embarked on ambitious reforms, welcoming tourism and investment in the once-isolated republic while keeping the authoritarian system intact.

Prior to his arrival in Tashkent, Pompeo met with the leadership of Uzbekistan's oil-rich neighbor Kazakhstan, where he called on all countries to join the U.S. calling for "an immediate end" to China's "repression" of minorities in the Xinjiang region, which Kazakhstan borders.

"We ask simply for (countries) to provide safe refuge and asylum for those seeking to flee China," Pompeo said Sunday at a press appearance with Kazakh foreign minister Mukhtar Tleuberdi.

His visit to the capital Nur-Sultan also saw him meet with Kazakhs who say their family members are detained in Xinjiang, where more than a million ethnic Uighurs, Kazakhs and other minorities are believed to have been incarcerated as part of an unprecedented security crackdown in the region.

Pompeo rounded off the Kazakhstan visit by meeting with President Kassym-Jomart Tokayev and his long-reigning predecessor Nursultan Nazarbayev.

Central Asia is a region where both Russia and China enjoy privileged interests, with Washington struggling to keep up in recent years.

Ahead of the visit, Pompeo stressed that the Central Asian countries on his itinerary "want to be sovereign and independent", and Washington had "an important opportunity to help them achieve that."

But he also acknowledged "a lot of activity (in the region) -- Chinese activity, Russian activity."

Pompeo also visited two other former Soviet countries -- Belarus and Ukraine -- as part of a trip that began with a stop in Britain.

The United States was among the first countries to recognize the newly independent states of Central Asia after they split from the Soviet Union in 1991.

At the height of hostilities in Afghanistan after the September 11 attacks, NATO and the United States maintained important logistics centers in the region, but these have now closed.

Russia has retained military bases and heads security and trade blocs that have helped to entrench its position there.

Uzbekistan was one of the countries where Washington maintained a base for Afghan operations but the two states fell out badly in 2005, when former leader Islam Karimov oversaw a bloody crackdown on protests.

The relationship had healed somewhat by the time of Karimov's death in 2016.

His successor Mirziyoyev, who visited Trump at the White House in 2018, has mused on the benefits of joining the Moscow-backed Eurasian Economic Union, a five-country bloc including Kazakhstan and Kyrgyzstan that is seen as a key vehicle for Russia to wield influence in the region.

Pompeo's meeting with ministers from the five states is part of a format that was first tried under a former secretary of state, John Kerry.

One of the five countries, Kyrgyzstan, reacted angrily Saturday to being included in a list of six countries targeted for immigration restrictions by U.S. President Donald Trump.

The impoverished republic of six million said the move had caused "significant damage" to relations.