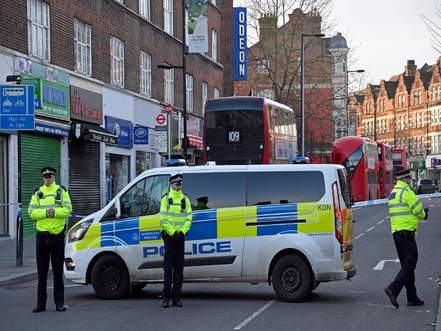 British police were searching two homes on Monday after shooting dead a convicted terrorist who knifed two people in a London street.

Sudesh Amman, 20, who was wearing a fake suicide vest, was shot on a busy road in south London on Sunday after what police said was an "Islamist-related" incident.

Amman was recently given early release from prison after serving part of his sentence for Islamist-related terror offences.

Counter-terror officers were conducting searches at one address in south London and one in Bishop's Stortford, north of the capital near London Stansted Airport.

Amman was jailed for three years and four months in December 2018 for 13 separate offences. He had been arrested in London in May 2018 on suspicion of planning a terrorist attack.

As part of what police said was a "proactive counter-terrorism surveillance operation", armed officers were following him on foot following his release.

Sunday's incident in the south London suburb of Streatham came just over two months after a similar incident when armed police shot dead a convicted terrorist on early release near London Bridge in the heart of the city.

He had stabbed to death two people attending a prisoner rehabilitation conference.

Prime Minister Boris Johnson said he would announce Monday plans for "fundamental changes" to the system for dealing with convicted terrorists.

He had already promised such changes following the London Bridge attack.

London Mayor Sadiq Khan said he was "angry" that the government had not already acted to change the law.

"That's one of the reasons why I'm not just frustrated but I'm angry at the... lack of progress in making the changes we were promised in November."

Khan said there were "roughly" more than 70 people in London who have been convicted of a terrorist offence, served time in prison and have been released.

Police cordons remained in place at the scene in Streatham on Monday.

One man in his 40s was in a non-life-threatening condition in hospital while a woman in her 50s has been discharged from hospital, police said.

Another woman in her 20s has minor injuries, thought to have been caused by broken glass following the police shooting of Amman. She was continuing to receive treatment in hospital.