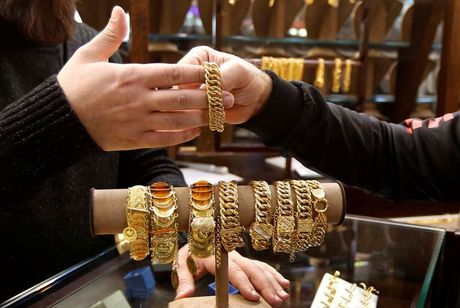 Companies are closing and restaurants are half empty but in the gloom of Lebanon's worst economic crisis in decades, luxury jewellers, supercar dealerships and art galleries are doing brisk business.

Worried that their life savings might vanish with a collapse of the banking sector, some Lebanese are syphoning cash from their accounts and buying the most expensive goods they can get their hands on.

Banks have slapped restrictions on withdrawals and overseas transfers, leading some depositors to use cashier's checks to spend savings they fear would otherwise be depleted by a haircut or a devaluation.

Companies encouraging Lebanese to offload their savings by investing in property have launched advertising campaigns on billboards and on social media.

"People want to diversify their investments as a precaution against the threat that hovers above the banking sector and the national currency," Kenaan said.

To be on the safe side, many choose to buy flats and houses outside of Lebanon for fear the property market could collapse too.

"Secure your savings with a property investment in Greece you can pay for in Lebanon," reads a Facebook ad for a real estate agency.

The Lebanese pound has been officially pegged to the dollar since 1997 but it has lost a third of its value on the parallel market recently.

With the prospect that Lebanon might restructure or default on its debt after years of economic mismanagement and corruption, many Lebanese fear that an official devaluation of the pound will slash their savings.

The loss of confidence in a banking sector that was once a source of national pride is such that deposits in Lebanon have slumped by $12 billion over the first 11 months of 2019.

For years, deposits had been fuelled by the influx of money from Lebanon's vast diaspora and Gulf residents who were attracted by high interest rates.

These rates, however, have decreased significantly since December, further dissuading depositors abroad and at home from putting their money in the bank.

Despite the controls slapped by banks to prevent capital flight, Lebanese depositors can still ask for cashier's checks and they are using them to buy goods they feel will not depreciate or can be easily resold abroad.

"More and more clients are buying gold coins, chains, bracelets and necklaces, only for their monetary value," said one jeweller whose business has 14 branches nationwide.

One car dealer who also asked not to be identified said Lamborghinis and Bentleys sometimes fetching $400,000 were still in demand "even as auto sales are generally plummeting".

"Sure, these cars gradually lose some of their value but for many buyers it's a case of trying not to lose everything," he said.

Artworks, a traditional safe investment in times of crisis, are being snapped in Beirut's edgy galleries.

"Lately I've had visits from people I've never seen before in my gallery," one owner said. "They basically want to see the largest paintings, buy the most expensive pieces."

Those who are unsure what to spend their money on tend to pull as much cash as possible from the bank and keep it at home.

According to the banking authorities, $3 billion have been withdrawn from banks and hoarded at home since September, triggering a rush on safes.

"Our sales have gone up 50 percent," said Khalil Chehab, a retailer who specialises in safes and lock boxes.

"Banks used to be our main clients before the crisis broke out, now it's their customers who are coming to us," he said, adding that some buyers were ready to spend up to $20,000 on high-end safes.

"People are no longer looking for any kind of profit. They just want to save their money, at any price."

But how does the retailer cash the cashier check?

Good point Keser, if banks only allow the subscriber to withdraw a max of $300 per week and the price of the Bently is $400k then that would take 25 years to pay off the car lol. But this is Lebanon and loopholes through Wasta is normal...

Wrong. Wasta has nothing to do with this. You can purchase anything in Lebanon with a Certified Bankers check, and at any amount.
However, whoever will receive the check, will see this amount of money frozen in a separate account for a period going from 2 to 6 months depending on your Bank.

How can we get the money out of the country? Is there a way?