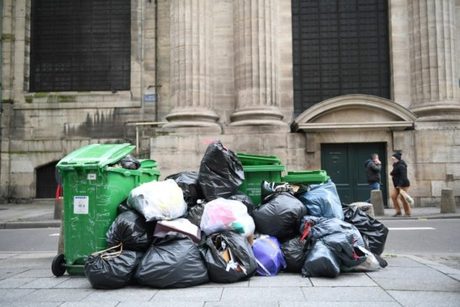 France's trains may be running again but the whiff of discontent over the government's pension reforms still hangs thick in the air as a waste disposal strike begins to bite.

Sidewalks in several parts of Paris have become obstacle courses of overflowing wheelie bins after 10 days of blockades at the city's incineration plants.

Six of seven incinerators used to burn the capital's trash have been brought to a halt by the strike, the agency in charge of the city's household waste said, leaving rubbish going uncollected for days in several areas.

In a city where public parks have battled rodent infestations in recent years, the trash pile-ups have raised public health concerns.

"And what's worrying is to see little rats running into the streets far more easily. It's an open bar!"

April Wood, an American tourist who was visiting the sights in Paris's Left Bank with her husband Andy, also expressed disgust.

"I think it is a deterrent as a tourist to have to witness it," she said.

In the southern port city of Marseille, where workers have been blocking waste-sorting centers for the past 10 days, some 3,000 tonnes of garbage have piled up in the streets, according to local authorities.

The city has required unions to provide a minimum level of service and placed garbage tips out for residents to stop them dumping their trash directly on the street.

Waste collectors are up in arms over the government's plans to fuse 42 different pension schemes -- including the early retirement plans enjoyed by train drivers, Paris Opera employees and several other groups -- into a single points-based system.

Train drivers last month suspended their strike after 47 straight days of disruptions to the Paris metro and inter-city trains that caused travel misery for millions.

President Emmanuel Macron's government argues that its reforms are necessary to make the pension system, one of the most generous in Europe, fairer for all and more sustainable.

Critics say it will force most French people to work longer for reduced payouts.

Garbage collectors argue that they should continue to be allowed to stop work early because their life expectancy is seven years less than for the average French person.