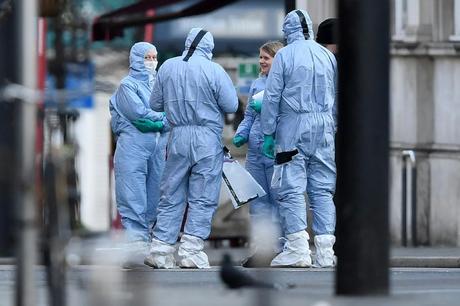 Sudesh Amman, 20, who was wearing a fake suicide vest, was shot dead by undercover armed police after knifing two people on a busy south London street on Sunday.

The Islamic State's propaganda arm called Amman "an IS fighter" and said "he carried out the attack in response to a call to target nationals" of countries belonging to the global coalition fighting against the jihadist group.

Amman was recently freed early from prison after serving part of his sentence for a string of Islamist-related terror offences -- namely the possession and distribution of terrorist documents.

The attack came just over two months after a similar incident when armed police shot dead a convicted terrorist on early release near London Bridge in the heart of the city.

"What was he (Amman) doing out on automatic early release and why was there no system of scrutiny, no parole system to check whether he was really a suitable candidate?" the prime minister told reporters.

"Looking at the problems we have with re-educating and reclaiming and rehabilitating people who succumb to Islamism, it's very, very hard and very tough -- and it can happen that the instances of success are really very few.

"My anxiety is that we do not want to get back to a system where you have a lot of very, very, laborious surveillance by our hard-pushed security services... when a custodial version might be better."

Amman had been arrested in London in May 2018 on suspicion of planning a terrorist attack. He was jailed for three years and four months in December 2018 for 13 separate offences.

After recently being automatically let out of jail part-way through his sentence, Amman had been staying in a hostel for newly-released prisoners in Streatham.

As part of what police said was a "proactive counter-terrorism surveillance operation", plain-clothes armed officers were following him on foot.

Amman stole a knife from a cheap goods store, then attacked a woman, then a man further up the high road, before being gunned down.

Eyewitness video footage showed him writhing on the pavement outside a pharmacy as plain-clothes armed police officers pointed hand-held weapons at him and urged passers-by to get to safety.

Amman had a dark vest with silver canisters strapped to his body.

Haleema Faraz Khan said he seemed "normal" when she visited him on Thursday, and he called her before Sunday's attack asking her to make him some mutton biryani.

Khan, who is originally from Sri Lanka, said she thought the eldest of her five sons had become radicalized in prison.

"He was watching and listening to things online which brainwashed him," she said.

"Before he went to prison he was not that religious. After he came out he was really religious."

Police cordons remained in place at the scene in Streatham on Monday, as forensics officers gathered evidence.

Of the two people stabbed, a man in his 40s was being treated in hospital for his injuries, which were said to be non-life-threatening. A woman in her 50s was discharged.

A third victim, a woman in her 20s, was treated for minor injuries though to have been caused by broken glass following the shooting.

Counter-terror officers were conducting searches at the hostel and a home in Bishop's Stortford, north of the capital near London Stansted Airport.

London Mayor Sadiq Khan said there were "roughly" more than 70 people in London who have been convicted of a terrorist offence, served time in prison and have been released.