Nine Arrested in Greenpeace Protest at BP in London 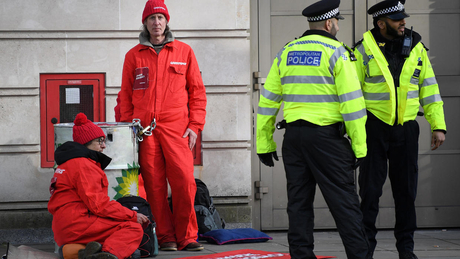 The Metropolitan Police said the arrests were made outside the firm's building in St James' Square, central London, as part of a "proportionate policing plan".

They were detained for aggravated trespass, highway obstruction and conspiracy to commit a public nuisance.

Around 100 activists launched the afternoon protest over BP's impact on climate change, locking themselves to dirty oil barrels and unloading 500 solar panels at the site.

The campaign group said they were promptly met by a "40-strong, heavy-handed police presence" but had managed "to peacefully block all six office doors around the building, preventing staff from entering".

BP said it temporarily closed the office as a precaution.

New chief executive Bernard Looney, who spent his first day in the role visiting employees in Germany, "understands the frustration and anger of protesters in London", the company said.

"He shares their deep concern about climate change and will set out his low carbon ambition for the company next week.

"He hopes that what he has to say then will give people a sense that we get it and are very serious about working to address the problem."

But demonstrator Immy Done, 22, who traveled from Bristol in western England to take part in the action, appeared unconvinced.

"Bernard Looney says he 'gets it' but his company has been lying to the world about the climate crisis they created my whole life and Looney was working there the whole time," she said.

"They're out of time, we're out of patience and they need to get out of the oil and gas business entirely."