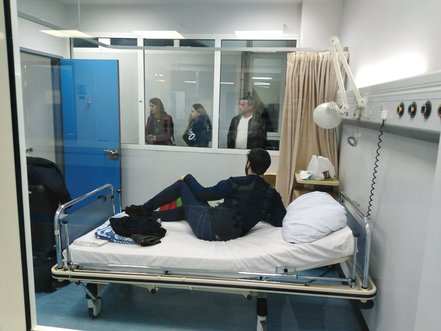 Health Minister Hamad Hasan said Wednesday that a Lebanese student who arrived from China is being quarantined at the Rafik Hariri state-run hospital in Beirut despite being “in good health” and showing no symptoms of being infected with the novel coronavirus that has killed 490 people in China.

“The Lebanese student who arrived from China is in good health and is not showing any symptoms,” Hasan told the National News Agency.

“There is nothing to worry about,” he added.

Hasan had earlier tweeted that “all the reports claiming that a Lebanese student has been infected with the coronavirus are baseless,” noting that “his family is near him and he is enjoying all the necessary care and attention.”

He attached a picture of the quarantined student to his tweet.

The minister had recently announced that the Rafik Hariri hospital has the ability to quarantine up to four people infected or suspected of being infected with the coronavirus.

LBCI TV had earlier reported that “a quarantined ambulance that was spotted passing through the al-Masnaa border crossing today was carrying a Lebanese citizen to the Rafik Hariri state-run hospital in Beirut.”

“The Lebanese citizen was in China with a group of Iranian and Syrian friends and he asked to be evacuated with them aboard a plane belonging to the Iranian airlines and the Iranian embassy approved the request,” LBCI said.

“The plane arrived in Tehran this morning before flying to Damascus airport, after which the Syrian red crescent coordinated with the relevant authorities in Lebanon and the Lebanese citizen was transported to the al-Masnaa crossing,” the TV network added.

He was received by a Lebanese Red Cross crew who then transported him to the hospital in Beirut.

“Preliminary examinations showed that the Lebanese citizen is not infected with the coronavirus,” LBCI said, noting that “precautionary measures were taken because the virus’ incubation period is around two weeks.”

“That’s why he was transferred to the Rafik Hariri state-run hospital where he will undergo preventative quarantine measures for 14 days,” the TV network added.

The number of confirmed infections in China has exceeded 24,000. Global concerns have risen after the World Health Organization declared an international health emergency last week.

Several governments have imposed travel restrictions while major airlines have suspended flights to and from China.