Diab Urges Businessmen to Be Partners in Salvation Process 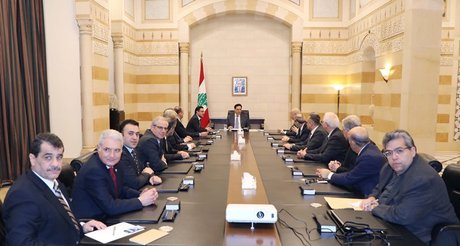 Prime Minister Hassan Diab on Friday urged the Lebanese to join efforts in order to salvage the country from multiple crises it “inherited from previous policies,” the National News Agency reported on Friday.

Diab pinned hopes on the substantial role of the Lebanese abroad, including that of expatriates and businessmen, to assist Lebanon amidst this crucial stage.

His remarks came during a meeting at the Grand Serail with a delegation representing the RDCL World, the Association of Lebanese Business People in the World, headed by RDCL World President Fouad Zmokhol.

"We are wagering on this role to be part of the rescue plan, because if Lebanon collapses, God forbid, everyone will pay a dear price, be it Lebanese residents, expatriates, ordinary citizens, employees, businessmen, and economic institutions; no one will be spared," Diab warned.

"Our country is enduring an exceptional stage that carries many challenges and risks. Today we are facing a dead wall, and the solution remains to destroy the wall that strangles Lebanon, disrupts its economic cycle, causes social and living crises, increases unemployment and triggers an acute shortage of liquidity," Diab said.

He went on to point to the dwindling capabilities of the state in light of the current challenges. "Thus, we are exerting relentless efforts and employing all our capabilities and contacts to make a difference; however, we mostly look forward to the important role of Lebanese expatriates and businessmen."