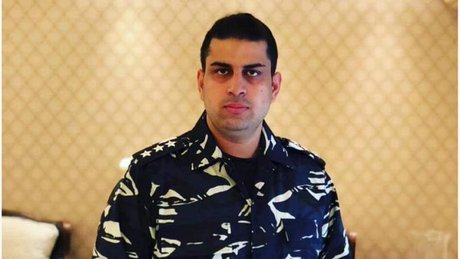 The station’s commander, Captain Jalal Shreif, was killed in the incident as the shooter, Lebanese national Hasan al-Hussein, shot himself dead after opening fire at the ISF members.

LBCI television said around 20 inmates escaped during the chaos and that the army later arrested seven of them.

Citing preliminary investigations, MTV said al-Hussein had entered the police station along with his mother to visit his jailed brother and was not carrying any weapon.

“A fistfight ensued between him and his brother, which prompted the intervention of the station’s commander and other policemen, after which he snatched the firearm of one of the policemen and shot dead the officer Jalal Shreif,” MTV reported.

“An adjutant from the al-Attar family was seriously wounded as another policeman was injured in the leg before al-Hussein shot himself dead,” the TV network added.

Allah yir7amo, the moqawame strikes again .
Liberating the inmates in Ouzai police station is key to the success in liberating Palestine.

Ashraf el ness doing what they do best...

No, no I refuse to believe it!

“ Hasan al-Hussein, shot himself dead after opening fire at the ISF members.“

According to Mystic, he even died with a smile on his face.... too bad he got mixed with the date. Today is Mahdi 11, Mahdi Gras is on the 25th. No Mahdi for him.... however he got to meet Skeletor who works courageously 24/7/365 with these social cases.

Shiisim at its most shameless!
Every-Single-Day!

No dude. Nothing to do with Shia - after all, Jalal Shreif was also Shiite, from Yamouneh. We're trying to eradicate sectarianism in Lebanon, not perpetuate it like Hizb want to.

RIP ISF--no way it should have ended like this.

And Ashraf Al-Nas. Bet we don't hear much from Barri or Basi about arms and such or about this incident.