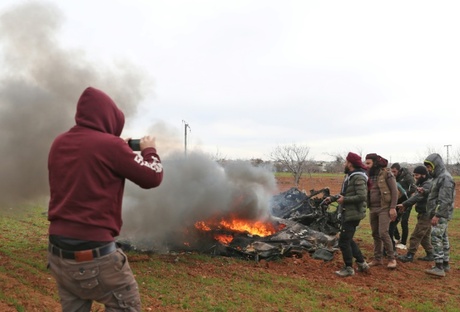 Tensions escalated Tuesday between Syria's regime and rebel-backer Turkey as a Syrian military helicopter was shot down and Ankara warned of a "heavy price" for any attacks on its forces.

The advance marked another step in President Bashar al-Assad's campaign to retake Syria's last rebel-held pocket, where nearly 700,000 civilians have fled violence since December in the largest exodus since the start of the war.

Shortly after the M5 motorway was recaptured, a rocket attack downed a Syrian regime helicopter in Idlib province, killing both pilots, an AFP correspondent and a war monitor said.

Syrian state news agency SANA confirmed the downing of the aircraft and the killing of its crew, saying it was caused by a rocket fired from a part of Idlib where Turkey-backed rebels operate.

The Britain-based Syrian Observatory for Human Rights said the helicopter was hit by a rocket fired by Turkish forces, though Ankara did not claim responsibility.

An AFP correspondent saw the bodies of the two pilots and the mangled remains of the helicopter at the site of the crash near the village of Qaminas, southeast of Idlib city.

Regime forces later shelled areas near a Turkish observation post in the same village, said the Observatory and an AFP correspondent who saw plumes of smoke rising following a large fiery blast.

The Observatory said the attack killed at least three people but it was unclear if they were Syrian rebels or Turkish troops.

Turkey, which has troops deployed in several locations in northern Syria, continues to support rebel groups battling the Assad regime or acting as proxies against Kurdish forces.

Along with regime ally Russia, it is the key foreign broker in northern Syria, but a 2018 deal aimed at averting a major offensive has failed to take hold.

"The more they attack... our soldiers, they will pay a very, very heavy price," he told a televised ceremony in Ankara.

Erdogan said he would reveal his next steps on Wednesday.

The Syrian army hit back in a later statement saying it was "ready to respond to the aggressions of the occupying Turkish army", accusing Ankara of targeting its positions with rockets.

US Secretary of State Mike Pompeo said Washington would work with Turkey on its response to Monday's attack.

"The ongoing assaults by the Assad regime and Russia must stop," Pompeo said on Twitter.

He said he had sent US special envoy for Syria James Jeffrey to Turkey "to coordinate steps to respond to this destabilizing attack."

Earlier Tuesday, Syria regime forces retook full control of the key M5 highway from jihadists and allied rebels in the northwest for the first time since 2012, the Observatory said.

That highway links the capital Damascus to the second city of Aleppo through Homs and Hama, and has been a key target for the government as it seeks to rekindle a moribund economy.

Half of those killed were minors, according to the monitor.

Turkey, which already hosts more than three million refugees, fears a massive fresh influx from Syria and has kept its border closed to the newly displaced people in Idlib.

The exodus, which has seen endless convoys of families with their mattresses stacked on trucks criss-cross the war-torn province, is the biggest of the nine-year-old conflict, the UN said on Tuesday.

"In just 10 weeks, since 1 December, some 690,000 people have been displaced from their homes in Idlib and surrounding areas," a spokesman for the Office for the Coordination of Humanitarian Affairs said.

"This is, from our initial analysis, the largest number of people displaced in a single period since the Syrian crisis began almost nine years ago," David Swanson said.

The Idlib region is a dead-end for hundreds of thousands of people who were forced to flee or were evacuated from formerly rebel-held territory elsewhere in Syria.

Some have moved four times or more since the start of the war but there is nowhere for them to go after Idlib, with the Turkish border to the north and government forces in the other three directions.

"Existing camps and settlements of internally displaced persons are overcrowded, and shelter in existing houses is getting scarce," the UN refugee agency said Tuesday.