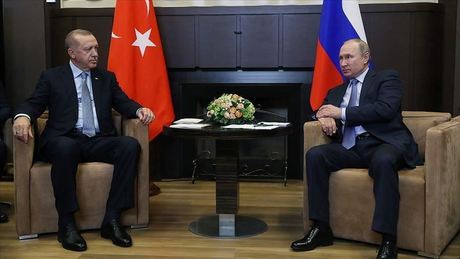 Russian President Vladimir Putin and Turkish leader Recep Tayyip Erdogan have discussed de-escalation of the Syrian crisis, the Kremlin said Wednesday, adding that Russian-Turkish agreements should be implemented in full.

"The importance was noted of the full implementation of existing Russian-Turkish agreements including the Sochi memorandum," the Kremlin said in a statement after the Putin-Erdogan phone call.

The leaders reviewed "various aspects of the settlement of the Syrian crisis, first and foremost in the context of a flare-up in the Idlib de-escalation zone", the statement said.

In 2018, Russia and Turkey agreed a memorandum to enforce a demilitarised zone in Syria's Idlib region from which "radical" fighters would be required to withdraw.

Russia insists, however, that groups of "terrorists" continue fighting in Idlib.

Speaking at a meeting of his ruling party in parliament, Erdogan on Wednesday threatened to strike Syrian regime forces "everywhere" if his soldiers were harmed and accused Russia of committing "massacres" in Idlib.

He said Turkey would act "from now on regardless of the Sochi deal".

Syria's Russia-backed government forces launched an all-out assault on Idlib in December, retaking town after town. Hundreds of thousands have fled and hundreds of civilians have been killed.

Turkey has backed some anti-regime groups in the eight-year conflict and set up military posts in Idlib under the 2018 deal.