Merkel Rival Merz in Bid to Succeed Her as German Chancellor 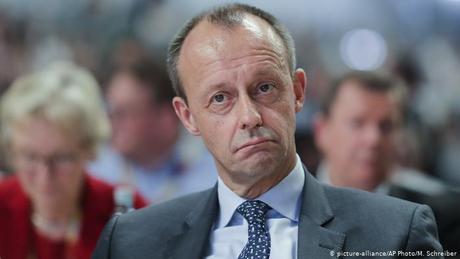 Friedrich Merz, a longtime rival of Angela Merkel within the ruling CDU party, is hoping to replace her as German chancellor, local media reported Wednesday.

Merz, who wants to shift the center-right party further to the right, is throwing his hat into the ring after Merkel's chosen successor, CDU leader Annegret Kramp-Karrenbauer, gave up her leadership ambitions on Monday in a deepening party crisis over ties between the centre and far right.

The next CDU leader will also be the party's candidate to become Chancellor at elections due by the end of 2021.

With the Christian Democratic Union (CDU) still ahead in the opinion polls, he would be well placed to succeed Merkel as she steps down after 15 years in office.

Merz, a 64-year-old lawyer, is preparing to stand in internal party elections expected in the coming months, the daily Bild and DPA news agency reported.

If he succeeds in becoming party leader it will become difficult for his rival Merkel to remain in power until her mandate ends next year. Early elections would become a distinct possibility.

Merz has never forgiven Merkel for driving him out as head of the party's group of MPs in the Bundestag in 2002.

He was narrowly beaten in the vote for party leader by Merkel's preferred successor Kramp-Karrenbauer in December 2018, and has been waiting in the wings ever since.

He announced this month he was quitting his job on the supervisory board of the German arm of investment firm BlackRock to dedicate himself to politics and to helping the CDU "renew itself".

In recent months Merz has attacked Merkel and her "failed" leadership.

Favored by the CDU's most conservative members, Merz wants to shift the party to the right to woo back voters lost to the anti-Islam, anti-immigrant AfD.

Kramp-Karrenbauer opted out of the race after barely a year in the post -- a period marked by internal battles over whether to cooperate with the anti-immigrant Alternative for Germany (AfD).

AKK, as Kramp-Karrenbauer is popularly known, said she had had "a difficult time" as party leader.

While the CDU party has a policy of no cooperation with either the far left or far right at a national level, regional CDU lawmakers last week nevertheless voted with MPs from the AfD to oust a far-left state premier in Thuringia.

The breach in the political firewall against the AfD prompted Merkel's junior partners in the national government, the Social Democratic Party (SPD), to call urgent talks at the weekend about the partnership's future.