Protesters Rally in Solidarity with Journalist Zbeeb after Assault 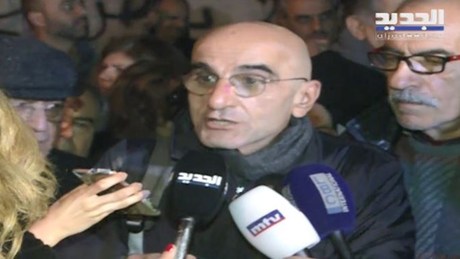 Anti-government protesters and a grouping of journalists rallied Thursday outside the central bank in Hamra in solidarity with prominent economic journalist Mohammed Zbeeb, who was beaten up overnight at the hands of three unknown attackers.

“Officials today are preoccupying people with lies and myths about the issue of paying Lebanon’s due debt,” a defiant Zbeeb said at the rally, noting that “every dollar paid as debt service or to pay the Eurobonds will come at the expense of our children’s milk.”

“When this uprising erupted, it specified its objectives and it will not calm down until it achieves all its demands and it shall emerge victorious,” he added.

“Those in power will be defeated,” Zbeeb stressed.

Zbeeb, a vocal critic of banks and the state’s financial policies, was assaulted at a parking in the Hamra area as he was heading to his car after taking part in an economic seminar.