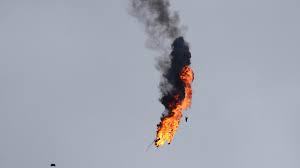 A Syrian military helicopter was shot down over the last major rebel bastion in northwest Syria on Friday, killing all crew on board, state media said, in the second such incident this week.

"At approximately 13:40 (1140 GMT), one of our military helicopters was hit by a hostile missile in the western countryside of Aleppo," SANA said.

"This lead the helicopter to crash, killing all crew on board."

SANA said the aircraft was downed near the town of Urum al-Kubra where Turkey-backed rebels operate, but it did not say who was behind the incident.

The Syrian Observatory for Human Rights blamed the attack on rebel-backer Turkey but there was no immediate claim of responsibility.

Turkey's state-run Anadolu agency also reported the incident, but did not say who was responsible or if there were any casualties.

Turkish media blamed the attacks on rebels but the Observatory said Turkish troops had fired rockets at the aircraft over the village of Qaminas, southeast of Idlib city.

Ankara acknowledged the incident in a statement but did not claim responsibility.

Syrian regime forces have pressed with a blistering assault on the shrinking rebel pocket in Syria's northwest since December.

The violence there has triggered the largest wave of displacement in the nine-year conflict, with 800,000 people fleeing since December, according to the United Nations.

Among the displaced, some 82,000 people are sleeping rough in sub-zero temperatures.

The unprecedented exodus has sparked alarm in neighboring Turkey, which fears an influx across its border.

Ankara, which has troops deployed in several locations in northern Syria, continues to support rebel groups battling government troops or acting as proxies against Kurdish forces.

It has sent reinforcements to the northwest in recent weeks to contain the latest push by Damascus, leading to a series of tit-for-tat exchanges between their forces.

The deadly clashes, the latest of which saw government shelling kill five Turkish troops this week, are the most serious since Ankara first sent forces to Syria in 2016.

Turkish president Recep Tayyip Erdogan in recent days has repeatedly threatened the Syrian government with attacks if it does not slow its Idlib push, but Damascus has pressed on.

On Friday, pro-government forces pushed west of the key M5 motorway, which connects Syria's four largest cities and is economically vital for the government, the Observatory said.

Syrian forces seized the last segment of the highway that still escaped their control earlier this week and SANA said on Friday that the areas flanking it had been swept and the road fully secured.

To consolidate a "security belt" around the road, it seized a key base on Friday that it had lost to rebels in 2012, the Observatory added.

Located 12 kilometers (seven miles) west of Aleppo city, Base 46 was the site of a brutal confrontation between government forces and rebels in the early phase of Syria's civil war.

The Observatory estimates that more than 150 Damascus loyalists lost their lives during the rebel takeover of the base at the end of 2012.

Its recapture marks a symbolic win for the government, which has reduced the rebel-held pocket to just over half of Idlib province, as well as slivers of neighboring Aleppo and Latakia.

With the base recaptured, government forces are now within two kilometers of Urum al-Kubra and five kilometers from Atareb, according to the monitor.

The Idlib region, which includes parts of Aleppo, is home to some three million people, nearly half of whom have already been displaced from other parts of the country.

It is dominated by jihadists of the Hayat Tahrir al-Sham alliance and their rebel allies.