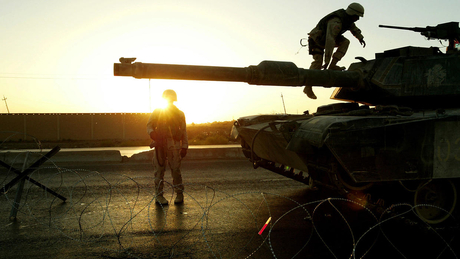 Irked by Iraq's close ties to neighbouring Iran, Washington has begun following through on threats to squeeze Baghdad's fragile economy with delays to crucial cash deliveries and slashed sanctions waivers.

This week, the US granted Iraq last-minute leave to import Iranian gas for its crippled power grids, despite American sanctions on Tehran.

But Washington's patience seems to be running out: the latest waiver was hacked from the usual 90 or 120 days to just 45.

"This is the beginning of death by a thousand cuts," warned financial analyst Ahmed Tabaqchali, of the Iraq-based Institute of Regional and International Studies.

"The shorter the waiver, the more we can't afford for things to go wrong in that time."

Iraq is at a crucial crossroads. Its new premier is struggling to form a cabinet, massive anti-government protests are filling the streets and skyrocketing tensions between its two main allies, Tehran and Washington, have already spilled blood on its territory.

While Iran enjoy tremendous political and military sway in Iraq, the US still holds a major trump card: the economy.

Every month or so, Iraq's Central Bank flies in $1-$2 billion in cash from the Federal Reserve in New York, where all its oil revenues are kept, to pay for official and commercial transactions.

But the mid-January shipment was more than a week late, a top Iraqi official and an oil industry source said, citing "political reasons" for the White House decision.

"We are on a knife's edge," the Iraqi official said.

It was the first sign Washington may implement a January threat to block Iraqi access to its money were Baghdad to oust the roughly 5,200 US troops stationed in Iraq.

That was the Iraqi parliament's response to a US strike on its soil that killed a top Iranian commander and an Iraqi paramilitary chief.

Washington has considered blocking the funds to pressure Iraq for months, a senior US diplomat in Baghdad describing it last year as "the nuclear option".

While February's dollars arrived on time, Iraqi officials said they expect Washington to start restricting how much cash Baghdad can bring in.

Losing access to its funds would have devastating ramifications for Iraq, whose economy relies almost entirely on oil exports paid with the greenback.

And if the sanctions waiver expires, Iraq would have to either stop buying Iranian gas and face mass outages, or keep importing and risk US sanctions itself.

Power cuts can last up to 20 hours a day.

Washington has tied sanctions to other issues including the nearly 20 rocket attacks on the US embassy in Baghdad and Iraqi bases hosting American troops since October.

"He told him to forget talks over a waiver renewal if the attacks continue," the official told AFP.

The US is also irritated by Iraq's slow progress in signing deals with major US energy firms and weaning itself off Iran.

"(Iraqis) have continuously rejected the deals with GE and Exxon," a senior administration official told AFP, weeks before the recent waiver expired.

"They are choosing to be dependent on the Iranians, giving (Tehran) a chokehold on their economy and infrastructure."

Iran, which has long sought to curb US influence across the region, is the second-largest exporter of goods to Iraq.

But the US dwarfs it in terms of direct investment, particularly the vital oil sector and infrastructure.

Sources in both Baghdad and Washington described a split in US policy, with the White House willing to ramp up pressure on Iraq while others argued for flexibility.

Hardliners were becoming "dominant," they said, and one Iraqi official described them as "transactional bullies."

In an interview with AFP following the waiver renewal, electricity minister Luay al-Khatteeb said Washington must not "corner Iraq."

"I am confident the US will not weaponise these waivers to compromise public services," he said.

Khatteeb cited signs of progress: deals already signed with Jordan and the Gulf for cross-border grids and possible gas purchases from the semi-autonomous Kurdish region.

"That announcement was a response to growing American pressure. You can see the Iraqi government panicked," said Tabaqchali.

But the US could find itself with little leverage other than "economic-based threats", said Ramzy Mardini of the United States Institute for Peace.

"That approach may work to secure US interests in the short term, but the overall bilateral relationship will remain severely impaired by distrust and animosity," he said.