Iran to Vote in General Election Many See as 'Lost Cause' 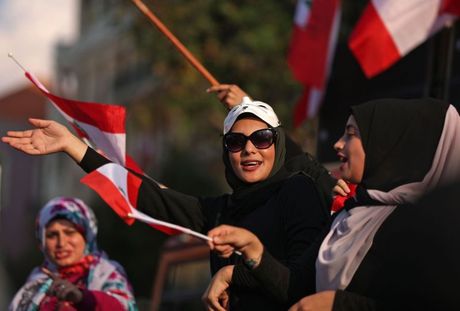 Iranians vote next week in a crucial parliamentary election that is widely expected to herald the return of conservatives and heap pressure on beleaguered President Hassan Rouhani.

Friday's vote comes after months of steeply escalating tensions between Iran and its decades-old arch enemy the United States.

The Guardian Council, the body that rigorously vets candidates, disqualified more than half of the 14,444 who sought to stand -- including dozens of mostly moderate and reformist incumbents.

A week of campaigning for seats in the Majles kicked off Thursday with little fanfare.

Faced with the stark choice of voting for the conservatives and whether or not to vote at all, those who backed Rouhani in the past see this election as a lost cause and are expected to stay away in droves.

"The majority of the current parliament is composed of reformists, and people believe that they haven't done anything serious" since being elected in 2016, said independent journalist Farshad Ghorbanpour.

"The Iranian people have come to the conclusion that their choice has no impact," he told AFP.

The purge of candidates was "unprecedented", said Ghorbanpour.

"Even some conservatives who were likely to speak independently and rationally in parliament have been disqualified."

Iranians are feeling the strain after months of turmoil.

In November, nationwide demonstrations over petrol price hikes turned violent before being crushed in a deadly crackdown.

Bread and butter issues have put Rouhani's alliance at risk of losing in a landslide.

A salesman in Tehran's Grand Bazaar summed up the mood, saying he would abstain as voting seemed "useless".

Asked what might convince him to change his mind, Mostafa Hamidi, 37, said it would be if those in power lived up to "at least one of their promises. Just one, not 1,000."

Another voter expressed despair over the country's mismanagement.

"The truth is that whenever we have voted, things never improved but got worse," said Morteza Jaberi, who works in a motorbike repair shop in Tehran's run-down Molavi neighbourhood.

"Our country is very powerful in all fields, but there are people in charge who cannot use this power properly," the 38-year-old told AFP.

Rouhani, a moderate conservative, came to power promising greater social freedoms and the benefits of engagement with the West.

But his signature achievement -- a 2015 nuclear deal that was meant to give Iran relief from sanctions -- is now in tatters.

In 2018 US President Donald Trump unilaterally withdrew from the agreement that froze Iran's nuclear programme and began reimposing crippling sanctions.

Tehran and Washington have been sworn enemies since 1979.

But they have never come as close to a direct confrontation as in the past seven months, when it has happened twice, most recently after the US killed prominent Iranian general Qasem Soleimani on January 3.

The "martyrdom" of the hugely popular general provoked an outpouring of grief in Iran.

Millions from all walks of life turned out to mourn his death.

But that unity suffered a blow after Iran admitted it "accidentally" shot down a Ukrainian airliner, killing all 176 people aboard.

The disaster, which claimed the lives of many students studying abroad, sparked more protests that turned political.

At stake in the February 21 election are 290 seats.

The disqualifications can only benefit Rouhani's conservative rivals whose solid support base always shows up at elections and has been spurred by the tense standoff with the United States.

Rouhani has repeatedly railed against the disqualifications, saying they threaten Iran's democracy.

"The greatest danger for democracy and national sovereignty is the day when elections become a formality," he said last month.

In the absence of real opponents, a grand coalition of "principalists" -- or conservatives -- looks set to win in a landslide.

But while it has been "increasingly sidelined in the decision-making process", a swing to hardliners may make Rouhani's life difficult, said Ellie Geranmayeh, analyst at the European Council on Foreign Relations.

The vote is also seen as an opportunity to gauge the electorate.

"The outcome should give a decent sense of popular opinion -- important in a country where quality public opinion polling is rare," said Henry Rome, Iran analyst at Eurasia Group.

"The election will also provide an early indicator of the outlook for the presidential election in mid-2021."

But Rouhani's coalition was unlikely to survive, he said.

"A right-wing parliament will torment Rouhani during his final year in office... complicating the government's ability to respond to sanctions pressures," said Rome.

"In contrast, if a right-wing president wins in 2021, the parliament can enable that leader to move quickly on new initiatives."

Polling stations are to open at 8:00 am (0430 GMT) on Friday and close 10 hours later. Results are expected in the days after the election.