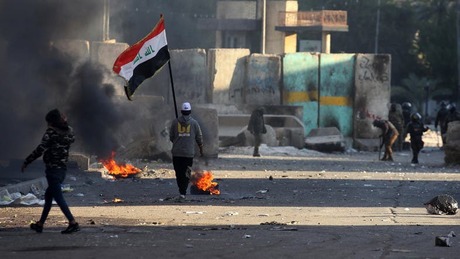 A demonstrator was shot dead near the Iraqi capital's main protest camp by unidentified attackers using a gun silencer, medics said Saturday, as police reported a spate of activist abductions.

Around 550 people have been killed since the anti-government movement erupted in October and around 30,000 more have been wounded, a vast majority of them young demonstrators.

As the movement has dwindled, some hardcore protesters have opted to remain in the streets but they have been subject to ongoing violence.

Late on Friday, unidentified gunmen entered a tent near Baghdad's Tahrir Square and shot a male demonstrator inside with a silenced pistol, a medical source told AFP.

It was unclear why he was targeted.

Another protester who was nearby said he saw a crowd gathering around the tent and yelling before pulling the body out and taking it to a nearby hospital.

The young man was already dead.

Activists have for months complained of a campaign of targeted kidnappings and even assassinations aimed at keeping them from protesting and for which no one has been held accountable.

Between Friday and Saturday, at least three activists were abducted from different neighbourhoods across Baghdad, a police source told AFP.

The Iraqi Human Rights Commission has documented more than 2,700 arrests since protests erupted, with more than 300 people still detained.

More than 70 Iraqis are categorised as disappeared.