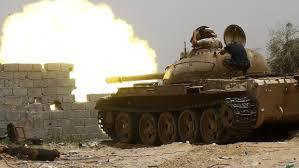 The situation in wartorn Libya is "deeply troubling", a United Nations representative said Sunday, warning that a fragile truce was hanging "by a thread" as daily life in the North African country worsens.

Speaking after talks with foreign ministers in the German city of Munich, the U.N.'s deputy special representative to Libya Stephanie Williams said that over 150 violations had been reported since last month's ceasefire was agreed.

She also slammed the ongoing breaches of a much-abused U.N. weapons embargo, even after foreign countries agreed in January to stop meddling in a conflict that has dragged in major regional rivals.

"The situation on the ground remains deeply troubling. The truce is holding only by a thread," Williams said on the sidelines of the Munich Security Conference.

"It is the Libyan people that continue to suffer the most. The economic situation continues to deteriorate, exacerbated by the oil blockade."

Libya has been mired in chaos since a 2011 NATO-backed uprising killed longtime dictator Moammar Gadhafi, with two rival administrations vying for power.

The conflict deepened when military strongman Khalifa Haftar, who controls much of the south and east of Libya, launched an assault to seize Tripoli, the base of the U.N.-recognized Government of National Accord (GNA) led by Fayez al-Sarraj.

States including Russia, France, the United Arab Emirates, and Egypt support Haftar, while the GNA is backed by Turkey and Qatar.

World leaders agreed at a Berlin summit last month to end all meddling in the conflict and stop the flow of weapons into Libya, but little has changed on the ground since then.

At Sunday's follow-up meeting in Munich, foreign ministers from over a dozen countries called the continued embargo violations "deplorable."

They urged Libya's warring parties, who did not take part in the meeting, to "maintain the current truce" and step up efforts to negotiate a lasting ceasefire.

German Foreign Minister Heiko Maas described a recent first meeting between military representatives from both sides as "a good sign", aimed at discussing ways to end the fighting.

Maas said the next so-called 5+5 meeting would take place in Geneva on Tuesday.

The Libyan rivals are also scheduled to hold their first "political dialogue" on February 26.

Rome is set to host the next international talks on Libya under the aegis of the United Nations.