Merkel Succession Contender Calls Her Out over Slow EU Revamp 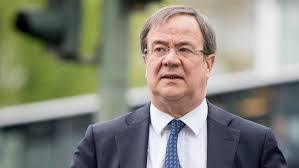 A leading contender to succeed German Chancellor Angela Merkel on Sunday criticized her for taking too long to respond to a French push to strengthen the EU after Brexit.

"I would like to apologize for the German government," Armin Laschet said, casting himself as strongly pro-EU as the race to find a new leader for Merkel's center-right CDU party heats up.

Macron has long called for an overhaul to the European Union in response to Britain's departure from the bloc, including deeper integration in financial and defense matters, and has repeatedly urged Berlin to champion the reforms with him.

"I would have liked a more engaged and faster answer to Macron, and a dialogue with him," Laschet, the premier of Germany's North Rhine-Westphalia state, said at the Munich Security Conference.

Speaking at the same gathering a day earlier, Macron said he was "impatient" at Germany's reluctance to take up his offer to jointly spearhead EU reforms.

Laschet said Merkel's government, an alliance between her conservative bloc and the center-left SPD, had not lived up to the promise enshrined in their 2018 coalition agreement to create a "fresh start" for Europe.

"We've not seen much of that in the past two years," Laschet said.

Looking ahead to Germany's six-month EU presidency starting in July, he said there was an opportunity for "a new momentum" on European issues.

Brexit, the migration crisis and other immediate challenges had made it difficult in recent times to focus on "big European visions", Laschet said.

"But now I think we are going to need them again."

Veteran chancellor Merkel is slated to retire from politics when her fourth term ends next year.

Her preferred successor, Defense Minister Annegret Kramp-Karrenbauer, recently stepped down as CDU leader and announced she was giving up her leadership ambitions, throwing the race to the chancellery wide open.

Laschet, seen as a compromise figure between the CDU's more conservative and centrist wings, has been tipped as one of three possible contenders to become the party's new leader and chancellor candidate in the next election.

But the 58-year-old refused to confirm in Munich that he had his eye on the top job.

Asked whether he saw his future in Duesseldorf, the capital state of North Rhine-Westphalia, or Berlin, he replied: "Aachen".

The German city was the ancient center of the empire of Charlemagne, credited with inspiring the European project.