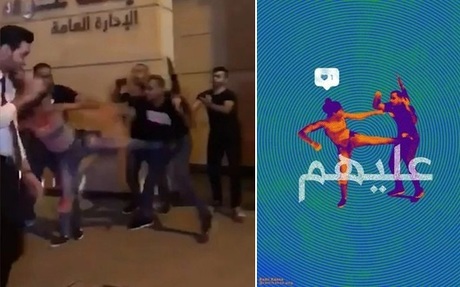 A woman whose kick to the groin of a Lebanese ministerial bodyguard made her an instant protest icon was summoned to court Wednesday and will face trial in November.

On October 17 last year, the day unprecedented cross-sectarian protests demanding a radical overhaul of the political system erupted across the country, she kicked the gun-wielding bodyguard whose minister was being confronted by demonstrators.

The moment she delivered her side kick was caught on video, fast becoming a viral meme and a symbol of the kind of message protesters wanted to send their rulers.

Malak Alawiye, against whom charges were brought last year over the kick, was summoned to a military court on Wednesday, a judicial source told AFP.

She will face trial in November for bodily harm and insulting the security forces.

The protest movement was ignited in October by a tax on voice calls made with WhatsApp and other messaging apps.

It has since grown into the biggest challenge yet to the patriarchal, sectarian and nepotistic political system that has governed the country for decades.

Earlier this month, Human Rights Watch criticized Lebanon for resorting to military courts to try several other civilians involved in the protest movement.

"Military courts have no business trying civilians," the watchdog said in a statement.

"Lebanon's parliament should end this troubling practice by passing a law to remove civilians from the military court's jurisdiction entirely," it added.

Look at this government of crooks attacking the revolution!

This is Syria style oppression!

Down with this regime NOW!

This is outrageous!!! She was summoned to a military court?!

These judges and politicians must be rounded up and executed or given a 'Corona' beer.

And the soldiers who actually killed the revolutionary Ahmad Toufic aren’t even investigated! They didn’t even analyze the bullet to determine which scumbag LAFman fired the dead shot.

This is actually the best thing that could happen to the revolution. This shows how afraid the idiots are of a woman kicking a guy armed to the teeth, and anybody who can think for themsleves will be angered by this...