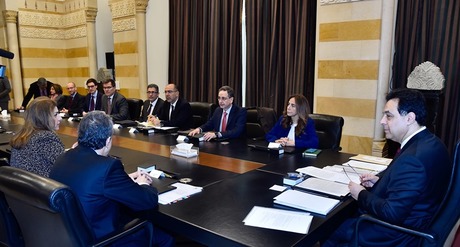 Prime Minister Hassan Diab held his first meeting with a delegation from the International Monetary Fund to assess the measures needed to rebuild Lebanon’s economy, the National News Agency reported on Thursday.

The IMF team first held talks in the morning with Diab, who after the meeting headed to the presidential palace for a Cabinet session. The IMF delegation stayed on at the government headquarters for talks with Diab's advisers and left afterward without speaking to journalists.

"We are in a phase of technical advice. Aid comes in the next phase," Finance Minister Ghazi Wazni said after the meeting.

The five-member delegation is also due to meet with Central Bank Governor Riad Salameh.

The meetings come amid concerns that Lebanon might default for the first time on paying back due Eurobonds.

Earlier this week, IMF Spokesman Gerry Rice said that the team will listen to Lebanese officials' views on how they plan to face the country's economic difficulties, take stock of recent macroeconomic developments and provide broad technical advice on policies to deal with the macroeconomic challenges facing the economy.

“Lebanon has not requested financial assistance from the IMF,” Rice said.

Wazni said in comments released by his office that the IMF delegation will discuss what advice it can give regarding a rescue plan that officials are preparing for the country.

Lebanon has been suffering from slow growth, high unemployment and widespread corruption that have triggering nationwide protests against the political elite since mid-October.

The country is passing through its worst financial and economic crisis since the end of the 1975-90 civil war. The local currency has lost nearly 60% of its value on the black market. Lebanon also has a massive debt, standing at $87 billion -— 150% more than the country's GDP.

The chairman of the Association of Banks in Lebanon, Salim Sfeir, met Diab on Wednesday to discuss Eurobonds that are due in 2020 and are worth $2.5 billion.

The first to mature are Eurobonds worth $1.2 billion that mature on March 9. Lebanese officials have been discussing on whether to pay on time — as they have always done in the past — or default.

Also Wednesday, Parliament Speaker Nabih Berri was quoted by a member of his parliamentary bloc as saying that “restructuring the debt is the best solution.”