Coronavirus 'Politicized' in Lebanon as Some Blame Iran 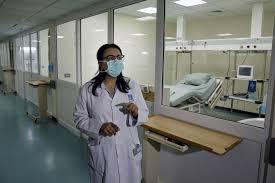 Some in Lebanon are casting blame on Iran, the supporter of the country's powerful Hizbullah group, after the country's first case of the new virus was discovered on a flight from the Iranian city of Qom this week.

Many Lebanese who support the Hizbullah-led coalition have remained silent on the issue of the virus, while some supporters of rival groups supported by the west blame Iran for the introduction of the virus into the country.

The first case of the new coronavirus was reported in Lebanon when a 45-year-old woman tested positive after flying from Qom on Thursday. The woman is in good health at Beirut's state-run hospital, according to Health Minister Hamad Hasan.

The minister announced Saturday that all people traveling from Iran to Lebanon will now be tested for the new virus before boarding flights to Lebanon.

Hasan held a news conference Saturday at Rafik Hariri University Hospital, which has been equipped to deal with cases of COVID-19, the illness caused by virus.

Hasan said 11 people returning from Iran who were suspected of carrying the virus tested negative. He said two of the cases were people who came aboard the Iranian jet that arrived Thursday from Qom.

"As if what Iran is sending to Lebanon and the Lebanese is not enough so it sent us coronavirus," said an editorial on the local MTV station. The station is a harsh critic of Iran and Hizbullah and the comment was an apparent reference to the weapons Tehran sends to the group.

The TV station also apparently referred to this week's visit to Lebanon by Iran's Parliament Speaker Ali Larijani who said Tehran is ready to help Lebanon as it experiences its worst economic and financial crisis in decades.

"Thank you Iran for allowing a jet carrying people infected with coronavirus to enter our airspace. Is this the way countries cooperate and is this the help that your promised Lebanon," the editorial said.

The daily An-Nahar newspaper had a front-page photo of three people wearing masks outside the Rafik Hariri Teaching Hospital and a headline that reads: "Coronavirus panic in Lebanon and a scandal of Iranian flights."

An-Nahar is also a harsh critic of Hizbullah and its Iranian backers.

Information Minister Manal Abdul Samad said political divisions should not be allowed to be used in this case.

Everything is related to politics and yes Iran is directly reponsible for the infections in Lebanon. There's nothing to debate here!
Persia is a curse for all of us... may the good people of Tehran overthrow the religious wackos for their own sake.

let's stick to the facts:
the health ministry declared that the "first case of the new coronavirus was reported in Lebanon when a 45-year-old woman tested positive after flying from Qom on Thursday."

what is politicized is that some want the flights from iran to be halted to prevent further cases to arrive. those pro iran will say it is politicized, those who are pragmatic will see that lots of countries have halted flights from infected countries without anyone to be shocked!! only in lebanon can a disease be a political problem!

but will this gvt take measures that won't please some political parties?