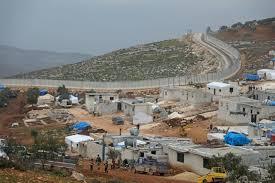 Abu Jabber has a plan to escape the Syrian regime's advance: he has built a ladder from rusty metal for him and his 11 children to climb over the Turkish border wall.

Six months ago, the family fled deadly fighting in Idlib province of northwest Syria, seeking shelter near the border village of Kafr Lusin, where dozens of families live in an informal camp for the displaced.

Newcomers live in tents while others, like Abu Jabber, his children and his parents, have built makeshift homes at the foot of a cement wall that separates Turkey from Idlib province.

Turkey, which already hosts the world's largest number of Syrian refugees with around 3.6 million people, has placed barbed wire and watchtowers along the wall to prevent any more crossings.

Ankara fears that an offensive launched in December by Russian-backed Syrian government forces against the last major rebel and jihadist bastion in Syria could spark another influx.

The government has this month escalated its offensive and seized dozens of villages and towns in Idlib and the neighboring province of Aleppo.

"When I saw that the situation was getting worse, I decided to build a ladder," said Abu Jabber, standing outside his new home among the olive groves of Kafr Lusin.

"I did this in case the regime makes further advances," he explained, undaunted by the formidable fortifications erected by Turkish authorities to keep his and other displaced families at bay.

"We will climb over the wall to protect the lives of our children," he said, pointing to the do-it-yourself ladder he made with bits of rusty metal.

Abu Jabber said there was no other solution. "Either they (regime forces) kill us all or we enter Turkey."

He and his family have been displaced several times since Syria's war erupted almost nine years ago.

Half of the three million people living in Idlib are displaced from other regions of Syria who abandoned areas recaptured from rebels by government forces.

Abu Jabber, whose home was originally in Hama province, said his 10-year-old son, who has an amputated hand, lost an eye in regime bombardment.

Trying to escape to Turkey also carries its risks.

"Going to Turkey is not really a choice, but I need security. I want to be able to sleep, I need shelter, heating and food," Abu Jabber said.

The regime offensive has displaced some 900,000 civilians since December, and an estimated 170,000 of them are living out in the open, the United Nations says.

The U.N. and aid groups have called for ceasefire, while the Norwegian Refugee Council (NRC) has warned of a "bloodbath."

"Our fear now is that a full-on offensive could lead to the worst catastrophe of Syria's brutal war, an out-and-out bloodbath for displaced civilians," NRC chief Jan Egeland said earlier this month.

UN High Commissioner for Refugees Filippo Grandi has urged Syria's neighbors, particularly Turkey, to take in more of the displaced.

"I am appealing for neighboring countries, including Turkey, to broaden admissions, so that those most in danger can reach safety -- even knowing that capacities and public support are already strained," Grandi said.

In Kafr Lusin, tents made of plastic sheeting are home to families of 10 people or more.

Abdel Razzak Sallat arrived at the informal camp two weeks ago from the town of Binnish, northeast of Idlib city, along with his eight children.

They now share a tent with his sister-in-law's family -- in all, 19 people crammed together under the canopy.

Their belongings, including flimsy mattresses and blankets, are piled up on one side, while an area has been turned into a makeshift kitchen with a gas cooker and foodstuffs kept on shelves.

By day, the family sits around a stove to keep warm, and at night they lay out the mattresses on the ground -- but there are not enough to go round and the space is limited.

So some of us "sleep sitting up," said Sallat.

Like Abu Jabber and others, he said he fled to Kafr Lusin for safety -- border regions are usually spared bombardments.

And like Abu Jabber, he said that if forced, he would "enter Turkey".

"Look how life is beautiful behind the wall, while here it's a disaster," he said.