Geagea Slams French Journalist who Claimed He Has Cancer 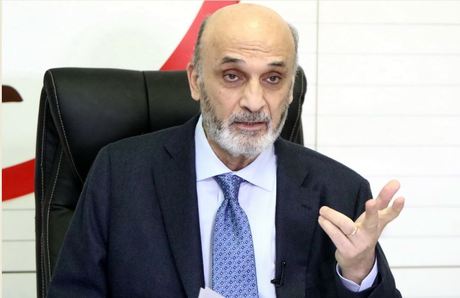 Lebanese Forces leader Samir Geagea on Tuesday lashed out at a French journalist who has published a report claiming that he has cancer, describing the allegations as “totally baseless.”

“Last week, I appeared at least three times through the media and I had an interview with more than 30 journalists, so how can the report about my treatment in France for three days be true?” Geagea said at a press conference dedicated to refuting the claims of the journalist, Richard Labévière.

“We will file lawsuits in France and Switzerland against this paid journalist,” Geagea added, blasting Labévière as “a friend of Michel Samaha and Jamil al-Sayyed and a defender of President Bashar al-Assad.”

The LF leader also criticized the Lebanese media outlets which published the allegations without exerting efforts to verify them.

The blog post published by Labévière on prochetmoyen-orient.ch claims that Geagea has been suffering for several years from advanced cancer localized in the pulmonary and urological systems.

“His illness was detected about two years ago and his doctors believe his life expectancy does not exceed one year,” the post alleges.

MP al-Sayyed meanwhile hit back swiftly at Geagea, stressing that Labévière is not his friend and that he has not contacted him in years.

“Geagea is a liar and his remarks prove that his illness is more dangerous than cancer: his illness is in his brain! May God heal him,” al-Sayyed tweeted.

Well, it’s either a case of defamation or a breach of doctor-patient confidentiality. Both are reprehensible in civilized nations.