Pompeo Says Iran Must 'Tell the Truth' on Coronavirus 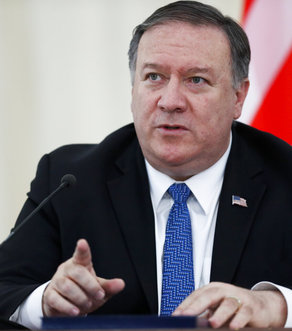 U.S. Secretary of State Mike Pompeo on Tuesday demanded that Iran "tell the truth" about a coronavirus outbreak, voicing alarm at allegations of a cover-up.

"The United States is deeply concerned by information indicating the Iranian regime may have suppressed vital details about the outbreak in that country," Pompeo told reporters in Washington.

"All nations including Iran should tell the truth about the coronavirus and cooperate with international aid organizations," he said.

Iran has reported 15 deaths from the epidemic, more than in any country other than China. Both countries are considered top adversaries by President Donald Trump's administration.

The Iranian government has pledged greater transparency after a lawmaker alleged that the clerical regime was playing down the outbreak and that the toll could be as high as 50.

Pompeo said that both China and Iran could have better contained coronavirus if they allowed free expression and he saluted foreign journalists who have reported on the epidemic.

"If China permitted its own important journals and medical personnel to speak and investigate freely, Chinese officials and other nations would have been far better prepared to address the challenge," Pompeo said.

Pompeo said that the United States had quarantined all people known to have contracted the virus and that Washington would take further "appropriate action" if needed.

If Iran can explain how some adversary introduced the coronovirus into Iran, leap-frogging over intervening countries, it would improve the atmosphere of trust and cooperation, said Pompeo.

chrisrushlau you're making the Italians nervous with your silly conspiracy and having them wonder who are their adversaries that introduced the coronavirus into Italy, leap-frogging over intervening countries, including Iran!