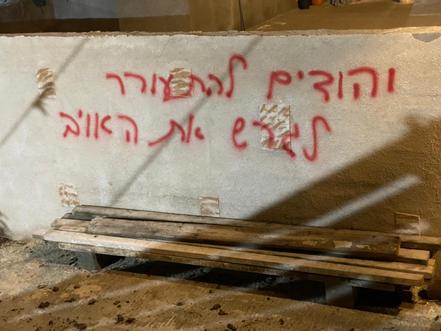 Israeli police said they were investigating Wednesday after vandals damaged cars and daubed racist graffiti in a Palestinian village in the occupied West Bank, in a suspected "price tag" attack.

Tires were slashed of more than a dozen cars and graffiti in Hebrew was daubed on walls in Yasuf, near the town of Nablus.

Among the slogans was the phrase "there will be a war over Judea and Samaria", the Israeli name for the West Bank.

Khaled Abeya, head of the village council, told AFP the perpetrators had entered the area before dawn.

"They slashed 14 cars and wrote a number of very serious slogans," he told AFP.

Abeya said the village was close to a number of Israeli settlements and he suspected Jewish settlers were responsible. "No one saw them," however.

Israeli police said they would investigate the incident in which "damage was caused to a number of vehicles and graffiti was found on a building".

The attack bore the hallmarks of a "price tag" attack, a euphemism for Jewish nationalist-motivated hate crimes that generally target Palestinian or Arab property in revenge for nationalistic attacks against Israelis.

In December, more than 160 cars were vandalized in the Palestinian neighborhood of Shuafat in Israeli-annexed east Jerusalem with anti-Arab slogans scrawled nearby.