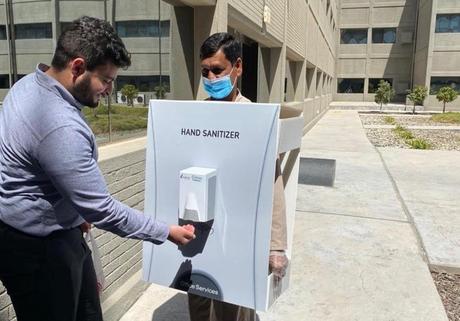 Energy giant Saudi Aramco has sought to distance itself from accusations of "racism" triggered by images of a migrant worker wearing a dispenser to hand out sanitizer to white-collar staff.

The images, which went viral on social media, showed the worker wearing a protective mask approaching staff outside company offices with a dispenser attached to a sandwich board.

"Saudi Aramco would like to express its strong dissatisfaction with this abusive behavior... without the approval of the company," the energy giant said on Twitter late Tuesday.

"The company immediately stopped this act and has taken strict measures to prevent it from happening again."

The statement came after the images were widely pilloried online.

The foreign worker, not identified in the images, "must be compensated for this humiliating act", another Twitter user wrote.

Another said it an act of "slavery".

The petro-state is home to millions of low-income foreign workers employed in blue-collar jobs largely shunned by Saudis.

Saudi Arabia, which has reported 21 coronavirus cases so far, has expressed alarm over its rapid spread across the Gulf -- most of them in people returning from pilgrimages to Shiite holy places in Iran.

Saudi Arabia has cordoned off the mainly Shiite district of Qatif, halted flights to and from 14 countries and closed schools and universities, in a package of measures to contain the virus.

Authorities have also suspended the "umrah" year-round pilgrimage to the Muslim holy cities of Mecca and Medina for fear of the disease spreading in the kingdom.

Saudi Arabia has blamed arch-rival Iran for its outbreak, while condemning Tehran for allowing its citizens entry without stamping their passports.

What Israel does is fine, though.