Syria War Enters 10th Year with No Hope in Sight 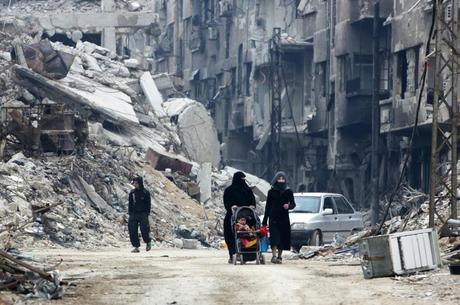 As it enters its tenth year, the war in Syria is anything but abating, as foreign powers scrap over a ravaged country where human suffering keeps reaching new levels.

When protesters in March 2011 demanded their rights and regime change, they likely never imagined it would trigger a reaction that has led to the 21st century's biggest war.

Nine years on, President Bashar al-Assad is still in power and there to stay, more than 380,000 people have died, dozens of towns and cities razed to the ground and half of the country's entire population displaced.

Nearly a year after the Islamic State group's "caliphate" was dismantled, the West's attention towards Syria was only pricked again last month when Turkey threatened to open the floodgates for migrants seeking to flee to Europe.

While the number of fronts has been reduced by Damascus' reconquest in recent years, the nature of the war is changing and violence is still raging in the northwest.

Some other regions have long been pacified, but people there have yet to feel the dividends of peace as Syria plays host to a complex international showdown involving Russia, the United States, Turkey, Israel and Iran.

Nine years ago, teenagers inspired by Arab Spring uprisings they saw on television, spray-painted a message on the walls of a school in the southern city of Daraa.

"Down with the regime. Your turn, Doctor," they scrawled, referring to Assad, a trained ophthalmologist.

But a violent crackdown soon saw revolutionaries take up arms with backing from Gulf nations, and wrest key areas from government control.

Jihadist groups also emerged, most notably IS, which swept across large parts of the country and neighbouring Iraq in 2014.

As the situation unravelled, foreign armies soon entered the arena, eventually leading Damascus, with the support of Russia and Iran, to regain the upper hand. It now controls 70 percent of the country.

Alarmed by IS, Washington intervened in 2014 with air strikes on Syrian soil as the head of a global coalition against the jihadists.

A year later Moscow waded in on Assad's side in a move that would turn the tide of Syria's war.

Iran, with its elite Revolutionary Guards and allied Iraqi and Lebanese fighters, also took an active role in backing the regime, in what analysts say was a move to secure access to the Mediterranean.

Turkey, meanwhile, launched the first of several incursions across its southern border in 2016 and last year seized a 120-kilometre (70-mile) long strip of land from Kurdish fighters it views as "terrorists".

Israel has carried out hundreds of strikes in Syria, which it says mostly target Iranian and Lebanese fighters.

Omar Abu Leyla, an activist now living abroad, accuses Western powers who initially took a stand against Assad of shifting all their focus to fighting jihadists after 2014 -- to the detriment of the revolution.

"Syria became increasingly destroyed and splintered after 2011, and the international community is responsible," he said.

Syria's war has displaced more than 11 million people at home and abroad, with Turkey absorbing more Syrian refugees than any other country in the world.

In the latest fighting, a Russia-backed offensive since December on the last major rebel bastion of Idlib has forced almost a million people to flee towards the closed Turkish border within months.

The ongoing humanitarian emergency in northwestern Syria has been described by the aid community as the worst since the start of the war.

A Russian-Turkish ceasefire holds for now in Idlib, though it is not clear for how long it will stem resisting jihadists and Turkey-backed rebels.

The deal was met with scepticism by residents who have seen countless other initiatives flounder in recent years, but Balanche said he expected the fighting to die down in the coming years.

After the northeast returns to the government, "the country will be a Russian-Iranian protectorate while Turks occupy the north", Balanche said.

Idlib would likely become a Syrian version of the Gaza Strip, he said, with millions crammed into a narrow sliver of land on the border.

In regime-held areas, the government has been accused of widespread detentions and forced army conscriptions.

Omar al-Hariri, another exiled activist, said it was hard to believe so many of his fellow Syrians were now dead.

"If we asked people today if they'd rather revert to the way things were before 2011, they might say yes," he said.

"But what's done is done. There's no going back."