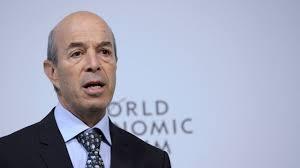 In 2015, Ian Goldin, an Oxford University professor, warned in his book "The Butterfly Defect" about the risks of a global pandemic in a modern, interdependent world.

It appears though that not everyone was listening.

Governments, Goldin argues, did not truly understand the potentially enormous dangers posed by astonishing events such as those witnessed across the world in the last few weeks.

"Pandemics have always threatened humanity more than wars," says Goldin, also a former World Bank vice-president. "We give too much money to our army... compared to our health system."

Globalization may have brought prosperity to many regions of the world but in terms of health the results have been different.

It has led to the concentration of populations in sprawling cities, with unsanitary slums and animal markets, where viruses can be easily spread while at the same time antibiotic resistance is becoming a major factor.

"We had not had a pandemic for a long time of the scale of that of (Spanish flu in 1918) which contaminated a third of the world population and killed approximately 50 million people," the South African-born former adviser to Nelson Mandela, told AFP.

Complacency was given a boost in recent years by the containment of outbreaks of Ebola, SARS, and avian flu "which made us too confident", he adds.

Coronavirus has hit a time when the world has turned away from multilateral institutions such as the International Monetary Fund, NATO, the United Nations, and forums for climate talks.

"This is particularly true of the United States, while Europe was in the midst of the euro and Brexit crisis and no one trusts China to lead the world," he said in an interview.

As a result, a "leadership vacuum" has occurred among the most powerful nations.

Goldin compares the situation now to when the US under president George W. Bush in 2008 called an emergency meeting of the G20 in the wake of the collapse of Lehman Brothers.

"It is once again the United States which presides... but Trump blames the rest of the world and in particular China," says Goldin.

The next G7 meeting will take place in June, but via video conference.

Goldin insists the way out of the current crisis, is through countries cooperating "to find a vaccine, share medical equipment, repatriate people".

Especially since he believes the current pandemic crisis will be "much worse" than the financial shock of 2008.

"We could see a cascade of financial shocks", with bankruptcies of companies but also of countries, he predicts.

Goldin gives the example of Italy, which was already in bad shape before the pandemic and which will now need economic "intensive care".

The full impact of what will happen will depend on our ability to collaborate in the immediate future, says Goldin.

But he asks: "Is the world capable of developing a coordinated action plan?"

So far, the signs are not good.

He believes that despite the hundreds of billions pledged by central banks and governments, the response has been insufficient.

"We already had rates close to zero," says Goldin. "The problem is not liquidity" and adds that stimulus policies may not work because "both supply and demand are broken".

The urgency, he says, is to give a basic wage to all those on low income, or with no medical coverage to prevent any further spread of the virus.

And we must similarly help companies struggling to survive by deferring or cancelling taxes and expenses for the duration of the crisis.

For now, the priority is to "restore confidence", he argues -- and to remember the lessons of previous crises.

Between 2007 and 2009, central banks, multilateral institutions and governments "showed a bias towards banks and individuals with lobbying power".

"We have seen a massive stagnation in wages", a surge in the homeless population while a fraction "of the 1 percent have won extraordinary amounts and no one has been in prison."

"There has been no taking responsibility for what happened," says Goldin.