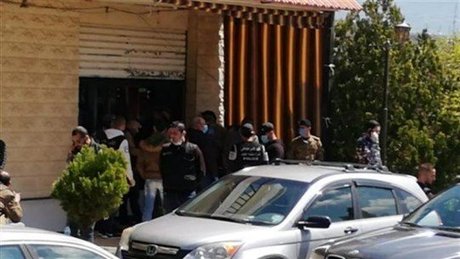 A retired policeman was found killed Sunday morning inside his grocery shop in the town of Miyeh w Miyeh near Sidon, the National News Agency said.

MTV said he was shot by a silencer-equipped pistol from a close distance.

Quoting high-level security sources, al-Jadeed TV identified the man as Antoine Youssef al-Hayek, saying he had served in the past as an official at the Khiyam Prison of the Israeli-backed South Lebanon Army militia.

A judicial source told French news agency AFP that Hayek was accused of killing two prisoners during a riot at the jail in 1989. He was brought to trial in 2001 but then released because of a statute of limitations.

The prison's alleged senior warden Amer Fakhoury was likewise accused of murder over this case, the source added.

“He joined the Internal Security Forces following the liberation of the South in the year 2000 and some former (Khiyam) prisoners had spotted him riding a traffic police motorcycle in Sidon,” the agency said.

“Local press had published several articles about this case, tackling his role in torture as an official at the Khiyam Prison,” it added.

Hundreds of SLA members fled to Israel in the year 2000 and afterwards, including Fakhoury, fearing reprisals if they remained in Lebanon. Others stayed and faced trial, receiving lenient sentences.

Hayek was one of those who stayed in Lebanon and was sentenced to 18 months in jail.

No one claimed responsibility for Hayek's shooting.

Hasan Hijazi, a former inmate at Khiyam, tweeted Sunday about his experience there. He said Hayek would flog prisoners with a whip and "turn detainees into a punching bag, and beat and kick them."

The release of Lebanese-American citizen Amer Fakhoury has sparked controversy in Lebanon in recent days.

Fakhoury went into exile more than two decades ago before returning to Lebanon in September, when he was arrested.

The 57-year-old was released on Monday over a statute of limitations on his alleged crimes, a judicial source said, though put under a travel ban, according to state media.

U.S. President Donald Trump on Thursday hailed Fakhoury's return to the United States, saying he was suffering from late-stage cancer.

Hizbullah chief Sayyed Hassan Nasrallah on Friday slammed Fakhoury's departure to the U.S. as an "escape" organized by the U.S. embassy and a "flagrant violation of (Lebanese) sovereignty and justice".

Witnesses accuse Fakhoury of ordering or taking part in beatings of thousands of inmates at Khiyam, but David Schenker, the top U.S. diplomat for the Middle East, disputed accounts of Fakhoury's involvement, saying his name did not come up in previous prosecutions of SLA members and charging that some in Lebanon wanted to use the U.S. citizen's detention as a bargaining chip.

Collaborators with Syria or Iran will eventually meet the same fate especially in countries where the judiciary isn’t independent as we’ve seen again at the Military Court.

This is what happens when you support Israel-.

God bless hezbollah aka the resistance for getting rid of all collaborators whether through silencers or on U.S army helicopters.

At least he remained loyal to Lebanon and died on Lebanese soil unlike hizbollah dying in Syria, Iraq and Yemen to defend Iran

Hezbollahs way of saving face. Let Fakhoury go and then kill a random ex-SLA (christian of course, though the majority were shiah). And this SLA happened to stay in Lebanon after the the Israelis withdrew. "A notorious aide of Fakhoury", right, so if he was guilty of something, why didnt they press charges?

80% of the SLA manpower were Shia and 20% Christians. Notice how the Shia always collaborate with occupation forces.... that’s how they survived the crusaders, the ottomans, the Syrians, the Israelis and now the Iranians always against the Lebanese’s interests.

80% shia? Where do you have those numbers from? Specialist on annahar lies.

But being an iranian collaborator is just fine in the banana republic of lebanon.