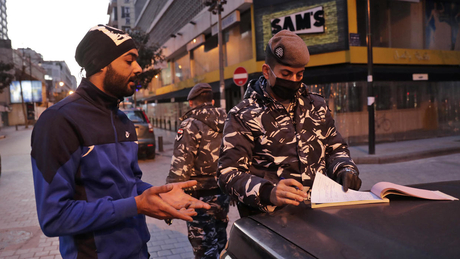 The Lebanese army and security forces continue to ensure that people stay at home to slow the spread of the novel coronavirus that has killed four people nationwide.

Staging patrols and blocking roads around Lebanon’s various regions, police made sure that Lebanese comply with a two week lockdown to stop the spread of the virus that has infected 248 individuals so far.Those disobeying were pursued.

He called on all Lebanese to observe a curfew, "as the state cannot face this creeping epidemic on its own".

The COVID-19 pandemic is the latest crisis to hit the country, already reeling from a financial meltdown and months of widespread public discontent.

Over the weekend, police patrolled several areas of the capital Beirut, using loudspeakers to call bystanders to go home.

On the seafront, they pursued and flagged down joggers, pleading with them to head back indoors.

An estimated 900 million people are now confined to their homes in 35 countries around the world -- two thirds by government lockdown orders, according to an AFP tally.