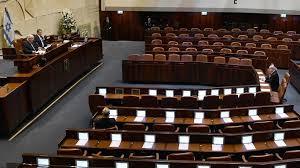 Israeli right-wing parties backing Prime Minister Benjamin Netanyahu boycotted the re-opening of parliament Monday to protest what they called the "dictatorial" conduct of their centrist rivals.

The dramatic move came after a year of political turmoil that saw three inconclusive elections, and as Netanyahu has imposed strict legal and security measures to deal with the coronavirus pandemic.

The row centered on whether Gantz would use his bloc's slight majority of lawmakers to shape the composition of a powerful parliamentary committee.

The election early this month saw the anti-Netanyahu parties claim a narrow lead of 62 seats.

Right-wing and ultra-Orthodox factions that back the caretaker premier claimed 58.

Gantz was last week tasked with forming a government, something that had proved impossible following the last two votes given deep divisions within the anti-Netanyahu camp.

There was no guarantee Gantz would fare better this time.

Monday's spat centered on the key arrangements committee, which is responsible for forming other parliamentary committees.

When the new Knesset was sworn in last Monday, lawmakers failed to agree on the committee's composition, which is traditionally negotiated among different Knesset factions.

But Blue and White declared it would put the issue to a majority vote.

Hours before the chamber was due to re-open, Likud announced its boycott, saying it would not take part in the "disgraceful process."

Gantz's bloc voted despite the boycott, creating an arrangements committee that will see Knesset business move forward, including the formation of a new body to tackle the coronavirus.

Gantz accused Netanyahu of trying to "paralyze the Knesset," in a speech to a near empty chamber on Monday.

Netanyahu has repeatedly called for Gantz to join him in a unity government, with the premier's job rotating between them, and President Reuven Rivlin has backed such calls amid the pandemic.

Netanyahu had also enlisted the Shin Bet internal security agency to track possible virus carriers through their mobile phones -- without a court order.

That move triggered outrage over alleged national security over-reach, with the supreme court ruling last week such surveillance could not go ahead without Knesset oversight.

The committee tasked with overseeing the Shin Bet, the foreign and defense committee, was scheduled to be formed in the coming days.

A dispute also escalated over the powerful job of Knesset speaker.

Likud has argued that its member and Netanyahu loyalist Yuli Edelstein should remain as speaker until a new government is formed.

Blue and White asked the supreme court to weigh in. On Monday, judges told Edelstein he had two days to schedule a vote for a new speaker.

Edelstein rejected what he described as the court's "ultimatum," saying it was not the role of judges to set the Knesset agenda.

Blue and White in a statement warned Edelstein that he would be "shamefully remembered" for defying the court.

Netanyahu is also facing criminal corruptions charges, allegations he denies, but which could soon leave him vulnerable: MPs who oppose him have backed legislation that would bar anyone under criminal indictment from serving as prime minister.