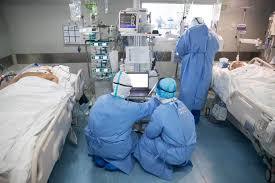 London hospitals are overwhelmed by COVID-19 patients, the head of an organization representing bosses in the state-run National Health Service said Thursday.

The chief executive of NHS Providers, Chris Hopson, told BBC radio that hospitals in the British capital have seen an "explosion of demand... in seriously ill patients", likening it to a "continuous tsunami", with numbers predicted to surge in the next fortnight.

According to the latest figures, 463 people have died from the virus and more than 9,500 people have been infected. London's population is about one-third of Britain's total.

However, the official statistics are thought to represent only a fraction of the actual number of infections across Britain.

The government is to open a temporary 4,000-bed hospital at an exhibition center in London next week to treat COVID-19 patients.

British media reported that 10 similar facilities could be set up around the country.

London has found itself at the epicenter of the country's epidemic as controversy rages over the adequacy of protective measures.

Prime Minister Boris Johnson, who last week recommended social distancing, on Monday ordered a national lockdown, telling people to stay at home and asking all non-essential shops and services to shut down.

But he has allowed people who cannot work from home to keep working, notably in the construction industry, resulting in some crowded London Underground trains.

The government has urged the capital's mayor, Sadiq Khan, to run more services so that passengers can maintain social distancing guidelines.

But Khan has said the Underground is running a limited service because of staff illnesses and shortages, urging only essential frontline workers to use the transport.

He has also called on government ministers to halt construction work.

Public transport use was down 13 percent on Thursday, according to the mayor, who tweeted: "The more we stay at home the more lives we can save."

Meanwhile, frontline healthcare workers in the capital and elsewhere have complained of a lack of  equipment as well as insufficient testing of staff for COVID-19 infection.

"Since coronavirus struck the hospital where I work in the south of England, chaos has descended," an anonymous NHS doctor wrote in the Daily Mail.

"If hospitals are to survive this, we urgently need adequate protective clothing. Otherwise we are lambs to the slaughter."

Hopson said the challenge of dealing with the increased number of patients in London was exacerbated by the "unprecedented absence rate" of medical staff.

"We're now seeing 30, 40 and even some places 50 percent sickness rates," he said, adding that there was also a "real problem" with ventilator capacity in hospitals.

His comments came as the government announced it had ordered 10,000 emergency ventilators to help tackle the pandemic from billionaire entrepreneur James Dyson.

In an email to staff, the inventor said his company designed the "CoVent" at Johnson's request, and promised to donate 5,000 to the international relief effort.

Dyson, a high-profile Brexiteer, said teams of engineers had been working on the design since receiving the call 10 days ago.

"We have received an initial order of 10,000 units from the UK government," he said.

The design must receive regulatory approval before production can begin.

"The race is now on to get it into production," Dyson wrote.