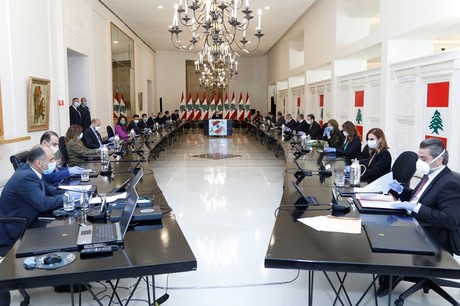 The Lebanese government on Thursday extended the so-called state of general mobilization until April 12 and ordered a general closure from 7pm until 5am with some exceptions, in an amplification of the anti-coronavirus measures, the information minister said.

The Premiership later said in a statement that only mills, bakeries, pharmacies and medical factories will be exempt from the 7pm-5am closure order, adding that citizens and residents will be barred from being on the streets.

The extension of general mobilization followed a recommendation from the Higher Defense Council which convened earlier in the day.

“Prime Minister Hassan Diab noted that we are still in the extreme danger phase and it is necessary to extend general mobilization because the containment period of the disease requires five week,” Information Minister Manal Abdul Samad said.

“The economic challenges need a mobilization that should perhaps exceed the health mobilization,” Diab added, according to Abdul Samad.

The premier urged “residents and expat Lebanese to contribute with the state to the support of needy families,” she said.

President Michel Aoun for his part reiterated the need for citizens to abide by the taken measures, especially home quarantine and limiting movement pending the retreat of the outbreak, the minister added.

The Cabinet also formed a committee to look into the issue of the Lebanese who want to return from abroad in light of the global coronavirus crisis.

“It will hold its first session today,” Abdul Samad said.

The government had first declared the state of general mobilization on March 15, asking citizens to stay home unless it is necessary, shuttering non-essential public and private institutions and closing the air, land and sea ports of entry.

Lebanon has so far confirmed 368 coronavirus cases among them six deaths and 20 recoveries.