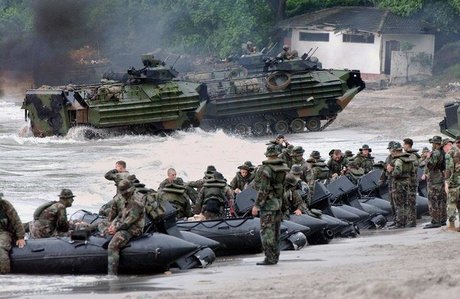 The US military has cancelled a large-scale exercise involving thousands of troops in the Philippines because of the coronavirus pandemic.

The decision to scrap Balikatan 2020 was taken "in light of the extraordinary circumstances surrounding COVID-19 pandemic and in the best interest of the health and safety of both countries' forces", US Indo-Pacific Command chief Admiral Phil Davidson said.

The war games, scheduled for May 4-15, would have involved more than 10,000 troops from the two longstanding allies and a smaller contingent from Australia, according to the hosts.

"We are in an extraordinary time and it's clear we would have put many people at risk had we pursued Balikatan," said Rear Admiral Adelius Bordado, the Philippines' exercise director.

The United States now has the largest number of confirmed coronavirus infections in the world while the Philippines, with limited testing, has reported around 700 cases.

The American troops who take part in Balikatan (which means "Shoulder to Shoulder" in Tagalog) usually come from bases in Japan and South Korea, which have reported coronavirus cases.