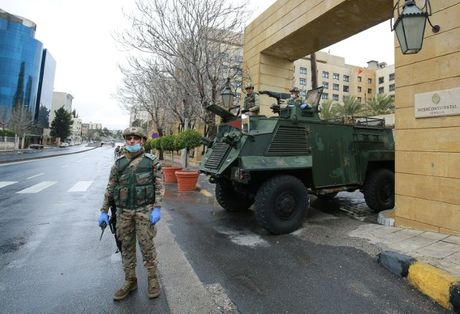 As countries across the Middle East tighten restrictions on movement to curb the spread of the coronavirus, a spokesman for the U.S. Agency for International Development said Thursday that it would suspend humanitarian aid to parts of Yemen over restrictions by the Houthi rebels that predate the pandemic.

A spokesman for USAID, one of the largest donors to U.N. operations in Yemen, told The Associated Press that it will "partially suspend" its operations the following day in Houthi rebel-held areas, where 70% of Yemenis live.

The decision came after the Houthis have spent months preventing U.N. agencies from using biometric testing and taking other measures to ensure aid flows to beneficiaries. The timing of the decision raised concerns that it could worsen Yemen's humanitarian crisis, among the worst in the world.

In Iraq and Lebanon, authorities extended far-reaching curfews for two weeks, while in hard-hit Iran, the death toll jumped by 157, prompting new steps to limit public gatherings and domestic travel.

In Saudi Arabia, authorities announced a total lockdown on the capital, Riyadh, and Islam's two holiest cities, Mecca and Medina, in addition to a nationwide curfew. The United Arab Emirates entered an overnight weekend lockdown.

Meanwhile, leaders of the world's most powerful economies, who had come under criticism for failing to take cohesive action against the pandemic, convened virtually to coordinate a stronger response. The G20 meeting, chaired by Saudi Arabia's King Salman, resulted in collective pledges to inject $4.8 trillion into the global economy to counteract the social and financial impacts of the pandemic.

Yemen, reeling from the world's worst humanitarian crisis after five years of war, has not yet reported a case of the coronavirus. But the suspension by USAID threatens to leave the country even more vulnerable to contagion.

"The U.S. government has made the difficult decision to reduce aid until we can be confident that U.S. taxpayer assistance will reach those for whom it's intended," the official said on condition of anonymity because they weren't authorized to brief the media.

Last year, the Houthis blocked around half of U.N. aid programs, many of which are directed at areas on the verge of famine. The rebels have resisted efforts by U.N. agencies to ensure that humanitarian aid is not diverted from civilians to rebel fighters and their supporters.

Yemen's conflict, which pits Iran-backed Houthi rebels against a Saudi-led coalition, has claimed more than 100,000 lives and displaced millions of people. On Thursday, the warring sides expressed support for U.N. Secretary-General Antonio Guterres' call for a freeze in fighting so authorities could focus their resources on the health emergency.

In a statement, the U.N. envoy to Yemen urged the leaders to "put their words into action" and "fight the common enemy, COVID-19."

Iraq, another health care system weakened by unrest and war, recorded seven more coronavirus-related deaths on Thursday, its highest jump in 24 hours. At least 36 people among 382 confirmed infected cases have died. Iraq's Cabinet extended the lockdown until April 11, as the army dispatched units for enforcement and religious figures appealed to the public to stay home.

Lebanon, which has recorded 386 cases and six fatalities, extended a lockdown of its 5 million people until April 12, Easter Sunday, likely to dampen celebrations among its significant Christian population. The government broadened its shut-down to include all public institutions and ordered essential stores, such as pharmacies and supermarkets, to close at nightfall.

In Iran, which is battling the worst outbreak in the region, the death toll rose to 2,234 on Thursday. There are more than 29,000 confirmed cases in Iran, where authorities have encouraged people to stay home but refrained from imposing the strict containment measures seen elsewhere.

However, President Hassan Rouhani on Thursday announced more restrictions, including a ban on public gatherings and transport between cities, as well as a closure of public parks.

Rouhani claimed that despite crippling U.S. sanctions, Iran is coping better than other countries. The government is offering a $5 billion package to support struggling businesses, and will extend low-interest loans to companies that retain their workforce, he said. It also pledged $1 billion to assist the overwhelmed health care system and the unemployed.

The lockdown of the Saudi cities of Riyadh, Mecca and Medina, includes a 15-hour curfew starting at 3 p.m., whereas the rest of the kingdom is under an 11-hour nightly curfew. Saudi Arabia has confirmed 1012 cases and four deaths.

Jordan, which has recorded 212 infections, announced on Thursday that anyone who flouts its nightly curfew will be fined up to 500 dinars (around $700). Repeat offenders could face up to a year's imprisonment. Only essential shops are allowed to operate in the kingdom. The government placed the densely populated northern city of Irbid, about 60 miles from Amman, the capital, under quarantine as it recorded 26 cases in the area.

In the UAE, a weekend overnight curfew began Thursday at 8 p.m., following the closures of malls, airports and beaches. Public transport will halt over the weekend for nationwide disinfection. Police in Dubai and the nearby emirate of Sharjah used drones to urge people to stay indoors.

The U.S. Navy said two sailors deployed to the UAE have tested positive for the virus while transiting through the island nation of Bahrain. Cmdr. Rebecca Rebarich, a Navy spokeswoman for the Bahrain-based 5th Fleet, told The Associated Press that other sailors traveling with the two infected had been quarantined for 14 days.

Rebarich declined to identify the unit or the number of sailors involved. However, the UAE hosts a Riverine squadron at a naval base in Fujairah on the Gulf of Oman, near the strategic Strait of Hormuz

The global death toll from the new coronavirus has climbed past 21,000 and the number of infections has surpassed 472,000, according to a count kept by Johns Hopkins University.

For most people, the new coronavirus causes mild or moderate symptoms, such as fever and cough that clear up in two to three weeks. For some, especially older adults and people with existing health problems, it can cause more severe illness, including pneumonia and death.