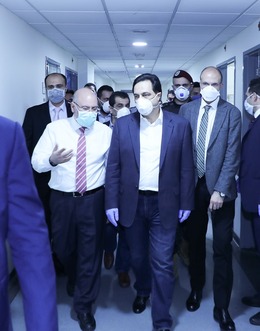 Prime Minister Hassan Diab on Friday inspected the state-run Rafik Hariri University Hospital in Beirut, which is leading the country's medical fight against the coronavirus pandemic.

He was welcomed by Health Minister Hamad Hasan and the hospital's administration.

"I have signed the memo sent by Health Minister Hamad Hasan regarding what's left of the new wage scale recompenses, which amount to LBP 1.5 billion, in addition to the previous LBP 950 million, referring it to the Finance Ministry," Diab said.

"All of the hospital's employees will be paid their new salaries at the end of this month, God willing," he added

Noting that "we are all facing very big challenges that are not targeted against a single Lebanese group, region, sect or political party," the premier urged all Lebanese to stand by each other and close ranks.

Diab also said that it would be better for Lebanon not to bring back the Lebanese abroad before the end of general mobilization on April 12 in order to protect both them and the country from new coronavirus infections.

He, however, reassured that the government will devise a clear plan for their return in the coming days.