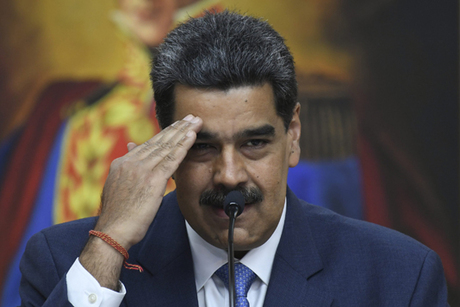 Venezuela's armed forces reaffirmed their support Friday for President Nicolas Maduro a day after the US Justice Department charged him with "narco-terrorism" and offered a $15 million reward for his capture.

In a statement read out on state television, armed forces chief Admiral Remigio Ceballos said the army categorically rejected "the extravagant and extremist accusations" against Maduro.

The socialist president has increasingly relied on the backing of the powerful armed forces since succeeding his late mentor Hugo Chavez in 2013 -- particularly amid his country's economic collapse.

In his statement, Ceballos said the indictment of Maduro and other Venezuelan officials was aimed at diverting attention away from the re-election campaign of US President Donald Trump "who will go down in history as the most harmful and most irrational of American presidents."

Maduro on Thursday slammed the "spurious, false" accusations, and said they were part of a conspiracy organized by the United States and Colombia to force him out of power.

The Trump administration has stepped up pressure on Maduro with sanctions targeting his inner circle. The US and some 50 other countries back opposition leader Juan Guaido as the country's interim president.

Guaido, who said Maduro had usurped power after a 2018 election widely seen as fraudulent, has repeatedly urged the 240,000-strong army to withdraw its support for Maduro.

In April last year, a call by Guaido for an uprising was supported by only a few army officers and was quickly crushed by Maduro, who retains the support of Russia, China and Cuba.