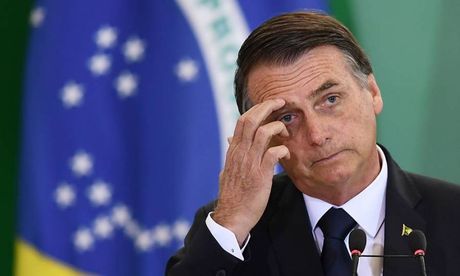 Brazilian President Jair Bolsonaro cast doubt Friday on his own government's statistics on COVID-19 deaths, saying he suspected they had been inflated to serve "political interests."

The far-right leader, who has railed against what he calls the "overblown" reaction to a disease he compares to a "little flu," said he did not believe the coronavirus statistics coming out of the state of Sao Paulo, whose governor he has attacked for his response to the outbreak.

Sao Paulo, a teeming industrial hub, has been hit harder by COVID-19 than anywhere else in Latin America so far, with 68 of the 92 deaths registered in Brazil, according to the federal health ministry.

But Bolsonaro questioned that figure.

"That's a very big number for Sao Paulo. We can't have a numbers game to favor certain political interests. I don't believe the numbers coming out of Sao Paulo," he said in an interview on Band TV.

Bolsonaro has repeatedly lashed out at Sao Paulo Governor Joao Doria, a former ally turned potential rival for the presidency, for ordering businesses to remain closed and people to stay home in a bid to contain the outbreak.

Bolsonaro, 65, says such "scorched-earth" policies could wreck the economy.

"Sao Paulo's not on the right path. The people realize now that (Doria) overdid it. I hope he takes a humility pill," he said.

Doria, a 62-year-old conservative, had some put-downs of his own for the president.

"Nearly half the world's population is staying home. The entire world is doing this, but somehow the one and only person who has seen reason is President Jair Bolsonaro? Think about that," he said.