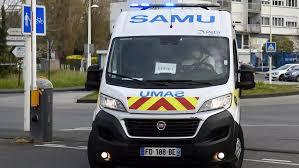 France on Monday reported its highest daily number of deaths from COVID-19 since the coronavirus epidemic began, saying 418 more people had died in hospital to bring the toll to 3,024.

There are now 20,946 people hospitalized in France with COVID-19, with 5,056 of them in intensive care, the government said in its daily update.

France has been in lockdown since March 17 in a bid to slow the spread of the epidemic and officials have repeatedly warned it will take time for the measures to bear fruit.

Top French health official Jerome Salomon told reporters that the figures "are in no way going down, we are in the midst of the epidemic."

He noted that the growth in infections in neighboring Italy had seen a "relative slowing" in the last days and expressed hope that the figures in France could show signs of improvement at the end of this week.

"The aim of the confinement is to massively reduce the contacts between people," he said.

"Our aim every day should be to have as few contacts as possible. If we reduce contacts, the virus can no longer pass from one person to another and the number of people infected should fall."

According to Salomon, the most reliable indicator of the virus' spread is the daily admissions to hospital and intensive care.

"From the end of this week, we should have less people who are arriving at hospital and going into intensive care," he said.

He said that 44,450 people had been tested positive as being infected in France, while the actual number could be much higher as only those deemed at high risk are currently being tested.