Despite Lockdown People Queue Near Sidon Banks, Normal Motion in Some Areas 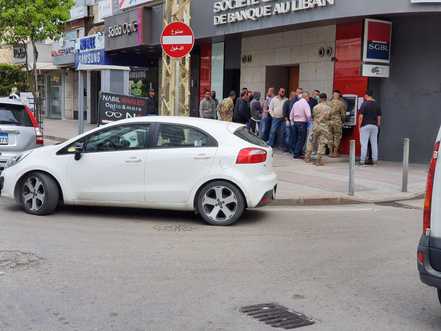 Lebanese in the southern city of Sidon stood in long queues for the second day in a row on Tuesday in front of ATMs without any protective gear against the novel COVID-19 that infected 463 individuals and killed eleven so far in Lebanon.

Main streets in the city, mainly in Riad el-Solh, saw traffic jam and citizens standing in ques outside banks as monthly salaries came through after two weeks of ongoing home confinement.

No one was wearing any protective gear like masks or gloves. People were standing close and not keeping a two-meter distance from each other in a bid to prevent any possible transmission from an infected person.

Media reports even said that some citizens were up in arms about the government-imposed lockdown.

Separately, citizens in the northern city of Tripoli also did not comply with the “general mobilization” period imposed by the government.

Videos and pictures of the city showed normal traffic movement.

MTV station said in a report that motion was also normal in the Metn areas of Dbayyeh and Jal Dib, and in the Beirut neighborhood of Tarik el Jdideh.

To try to contain the spread of the virus, Lebanon has imposed isolation measures on its population until April 12, with a nighttime curfew in effect. Schools, universities, restaurants and bars are closed.

Many fear the country's healthcare system could be overwhelmed by cases.

People need to pay for their food and rent, there’s no other way around.

Is the bankrupt state going to freeze the politicians’ account and recover the stolen billions to help the people now?