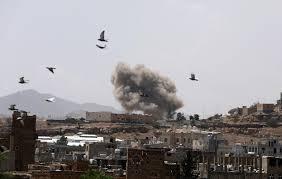 The Saudi-led military coalition has carried out multiple air strikes on Yemen's rebel-held capital Sanaa in retaliation for missile strikes on Riyadh.

Residents in Sanaa reported multiple explosions after the bombing raids began, in a new escalation  despite U.N. calls for a ceasefire to protect Yemeni civilians from the coronavirus pandemic.

The military operation targeted the "storage, assembly and installation sites" of ballistic missiles and drones across territory held by the Huthi rebels, the coalition said in a statement released by the official Saudi Press Agency.

The Huthi-run Al-Masirah television reported at least 19 air strikes on a number of targets in Sanaa, including military bases and a military academy.

The attacks left two civilians wounded in Riyadh, which is under a 15-hour per day curfew to limit the spread of coronavirus, according to Saudi state media.

It was the first major assault on Saudi Arabia since the Huthi rebels offered last September to halt attacks on the kingdom after devastating twin strikes on Saudi oil installations.

Fighting has also escalated between the Huthis and Riyadh-backed Yemeni troops around the strategic northern districts of Al-Jawf and Marib.

The rebels stormed a key governmental military camp in Al-Jawf after heavy clashes on Monday, according to Yemeni military sources.

The escalation comes despite a show of support on Thursday by all of Yemen's warring parties for a UN call for a ceasefire as the Arab world's poorest country remains vulnerable to the coronavirus pandemic.

Saudi Arabia, the Yemeni government and the Huthi rebels had all welcomed an appeal from UN Secretary General Antonio Guterres for an "immediate global ceasefire" to help avert disaster for vulnerable people in conflict zones.

On Sunday, UN special envoy Martin Griffiths reiterated the call for an immediate cessation of hostilities to help avert the "potentially disastrous consequences" of the coronavirus outbreak.

Yemen's broken healthcare system has so far recorded no case of the COVID-19 illness, but aid groups have warned that when it does hit, the impact will be catastrophic.

The country is already gripped by what the UN calls the world's worst humanitarian crisis.

Saudi Arabia is also scrambling to limit the spread of the disease at home. The kingdom's health ministry has reported 1,453 coronavirus infections and eight deaths from the illness so far.